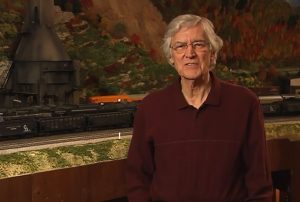 Join Jim on an in-depth tour of the Chesapeake and Ohio Ry. Hinton Division. It was during several trips to West Virginia that Jim’s vision for his layout took shape. Jim began physically building his O scale layout in 1983, but he had been planning, dreaming, and even building small structures for many years before then. He chose to model the area as it appeared in October 1950 because of the access to complete prototypical timetable information.

The modeled portion of Jim’s layout is 35 x 50 feet and his main line is approximately 775 feet long. The operating scheme was very important to Jim and with a lot of research, careful planning, and patience he was able to create a system with accurate trains running through realistic scenes and on prototypical schedules. You’ll learn about the history of the C&O, the inspiration behind the layout’s operating scheme, and what Jim wanted to accomplish with the layout’s design.

In addition to touring Jim’s layout, you’ll learn a few tricks that he used to add realism to his layout in a matter of minutes, including “flinging” plaster, creating tree-tops, and adding nighttime lighting. You don’t want to miss this up-close look at one of America’s greatest layouts. 59 minutes.