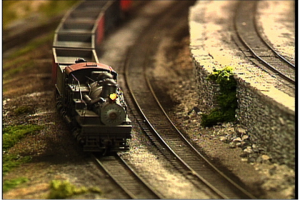 As much as we all love trains there has to be room on our layouts for cars and trucks. These vehicles, of course, need some way to get around and through the scene. Realistic looking roads are the answer and these videos will smooth out the way. 228 minutes.

Dick Elwell’s Hoosac Valley is a bridge route that interchanges with the Boston & Albany, the Delaware & Hudson, the New Haven and the New York Central. The HO railroad features magnificent New England scenery with lots of rivers and forested mountains. Dick will show you his method for making super-detailed foreground trees. That skill at detailing carries over to the layout’s many mini-scenes. These are life-like vignettes that tell a story of a slower era. You’ll tour the 40×26 foot Hoosac Valley from one end of the layout to the other behind a GP-7, and then an RS-1. You’ll go on board to enjoy a beautiful looking and operating railroad that Dick and his friends have created with exquisitely weathered structures and rolling stock. You’ll be inspired as Dick recounts some of his early pitfalls as a beginner in 1959. And you’ll enjoy knowing that this layout evolved from an idea on a piece of paper into a Great Model Railroad.

Jim Hertzog’s “Reading Line” runs thorough the Pennsylvania coal fields in the mid- 1950s. This HO railroad interchanges with the Pennsy and the Lehigh & New England and serves 12 coal mines and processing plants. Because this is mountain railroading, the grades are steep and require helpers. The Reading was carefully designed to get the maximum use out of a 30×40 foot basement. Jim has captured the gritty look of Appalachian coal mining. He will show you how to understand a colliery, make concrete roads, weather cars, make trees and use fascia lettering