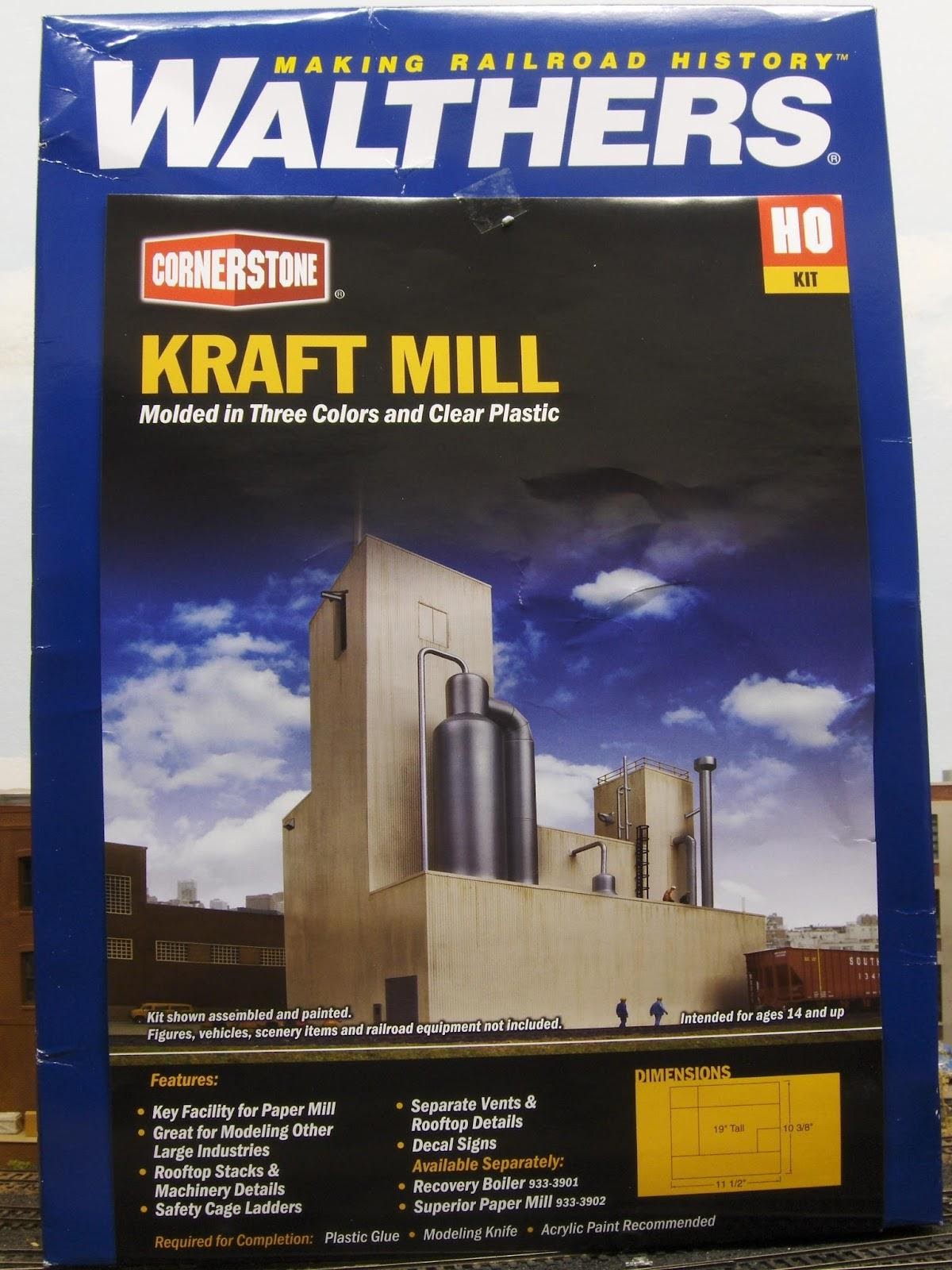 I had to finish up the new Apache Railway scene for my friend Dave’s Chicago Denver & Pacific layout. This required the Walthers Kraft Plant in addition to the power house and the paper mill itself that I had already completed. The Kraft Plant is the final step in manufacturing white paper. 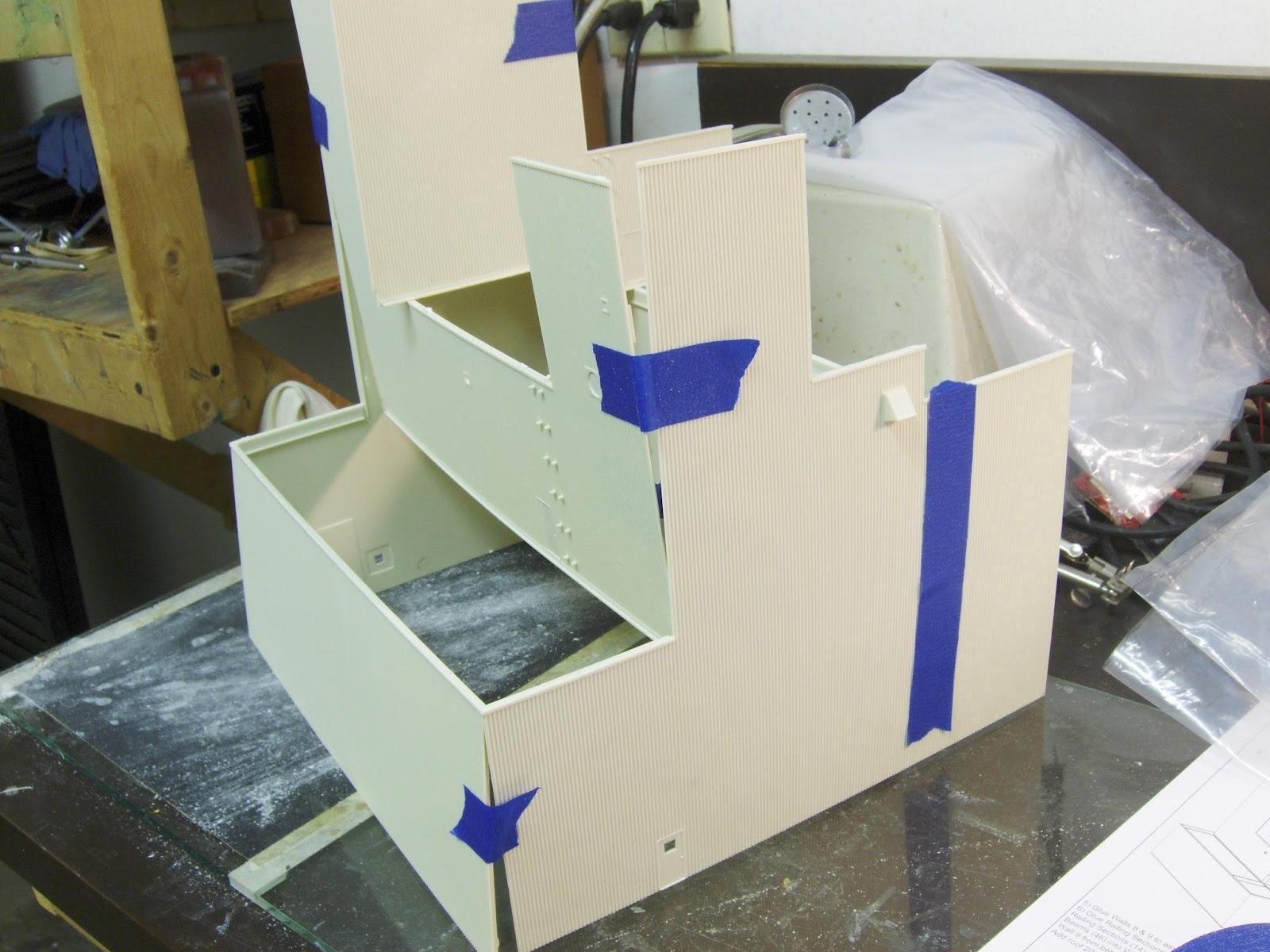 I began by taping together some pieces from the kit. It was apparent from this exercise that I would need more material to make the building tall enough and long enough to hide an overhead track behind the scene. Additionally, the plant could only be seven inches deep. That meant I had to cut away the right-hand portion of the side marked with the vertical blue tape. 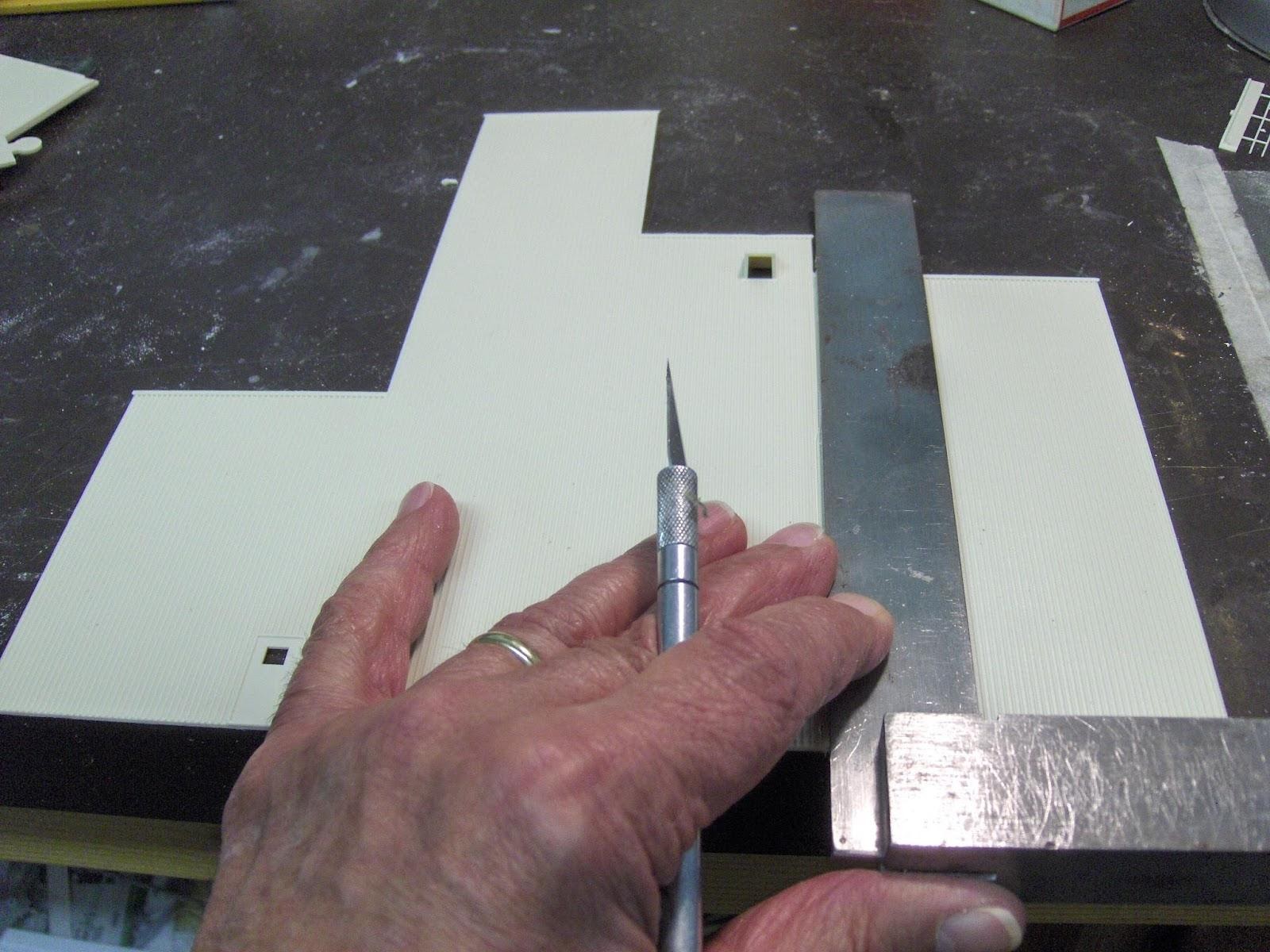 I used a square and carefully removed the excess material. After scoring the styrene with a sharp knife about 30 times, the two pieces can be easily separated by snapping them apart. 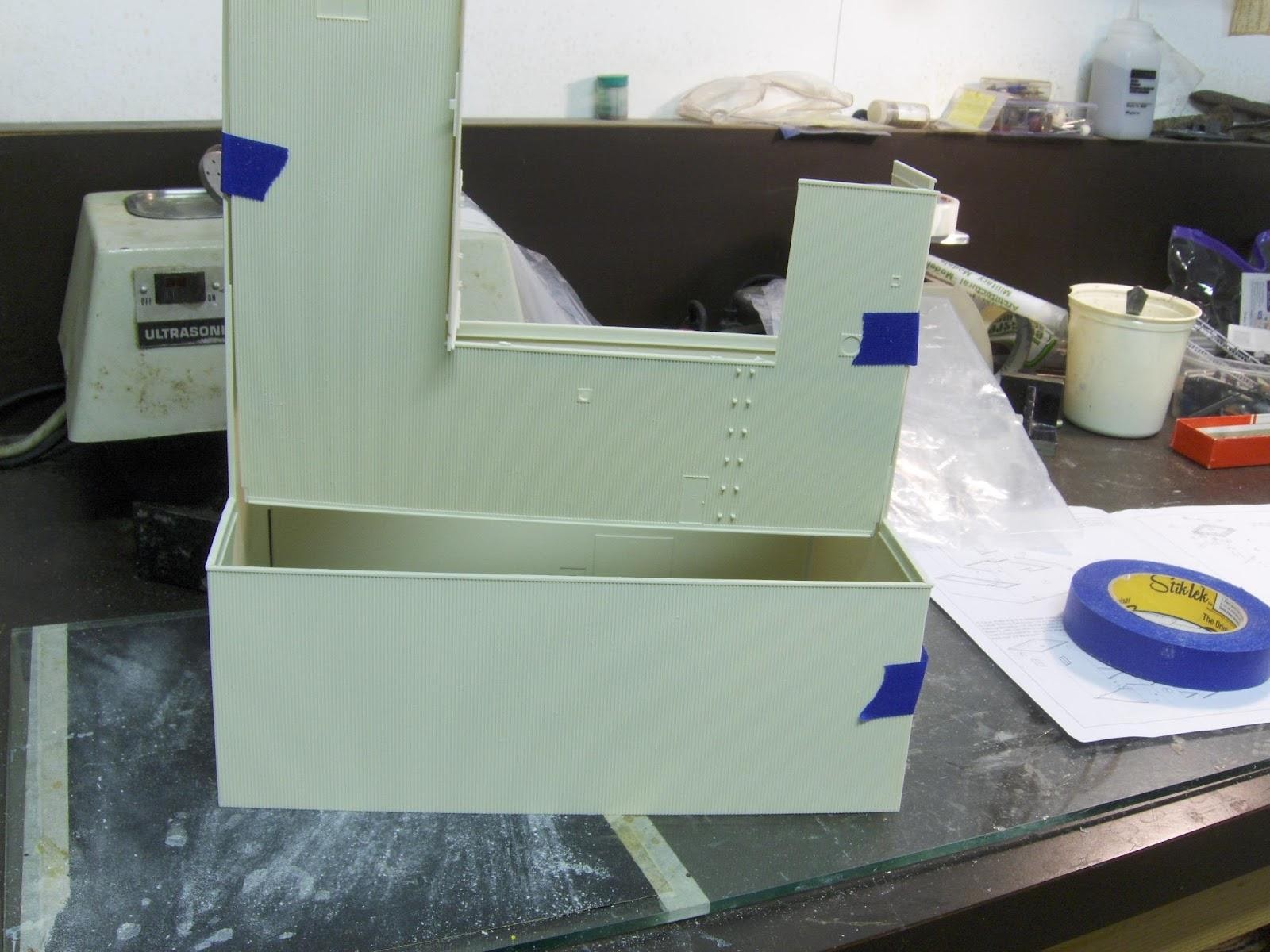 However, I soon discovered that there was not enough material in the single kit to make the plant tall enough to hide the overhead track on the layout. I hunted for another kit to order, and only found one kit that was still for sale. These kits were introduced about eight years ago and have since been sold out in many places. 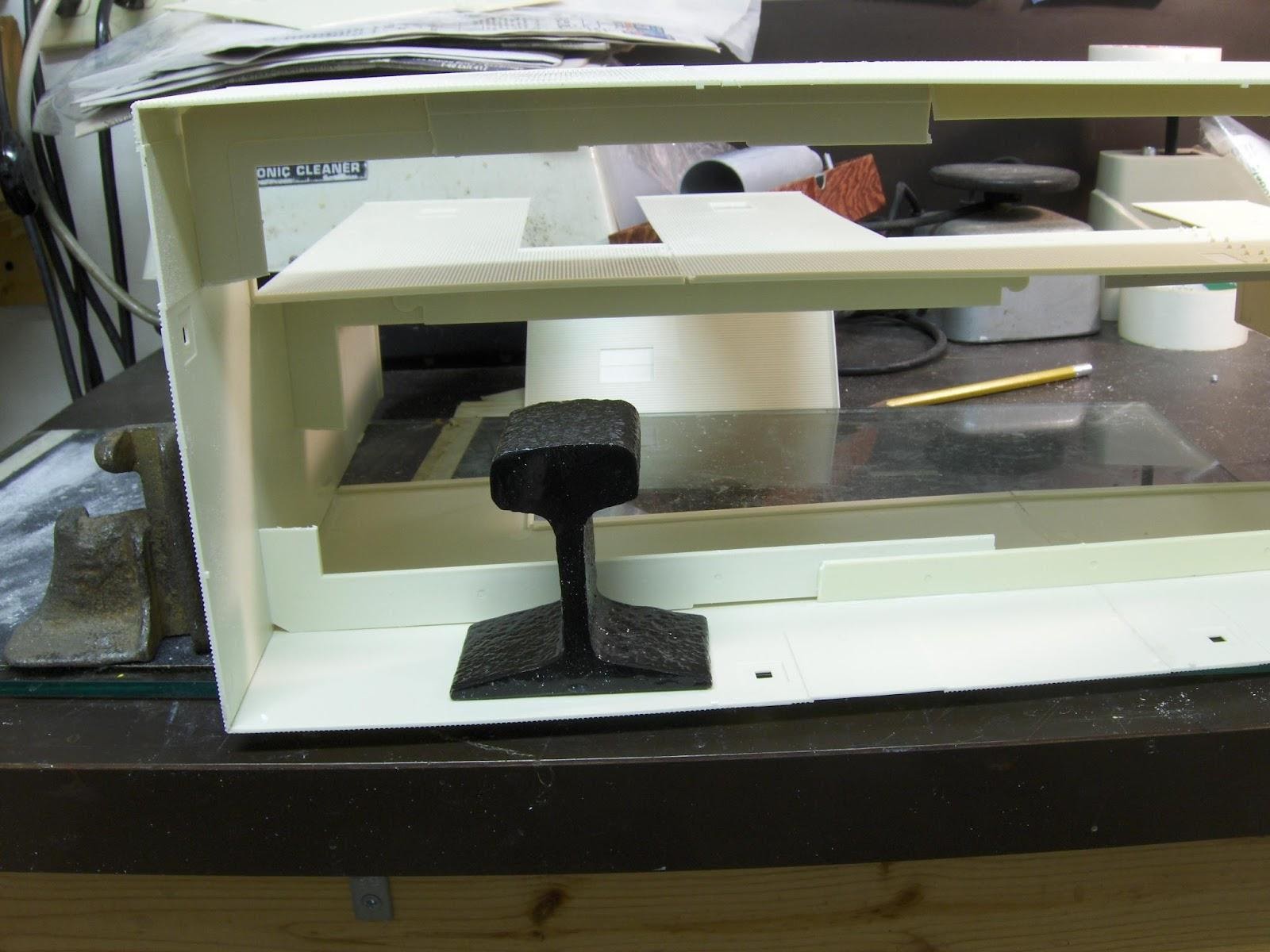 When the extra kit arrived, I examined the parts and decided I could use them to make the building longer and taller. It now measured about 7”x17”, but the height was still going to be about 15”. Here you can see how the sides were glued to make them longer, and styrene braces were applied to keep it all straight and level with the help of this weight. 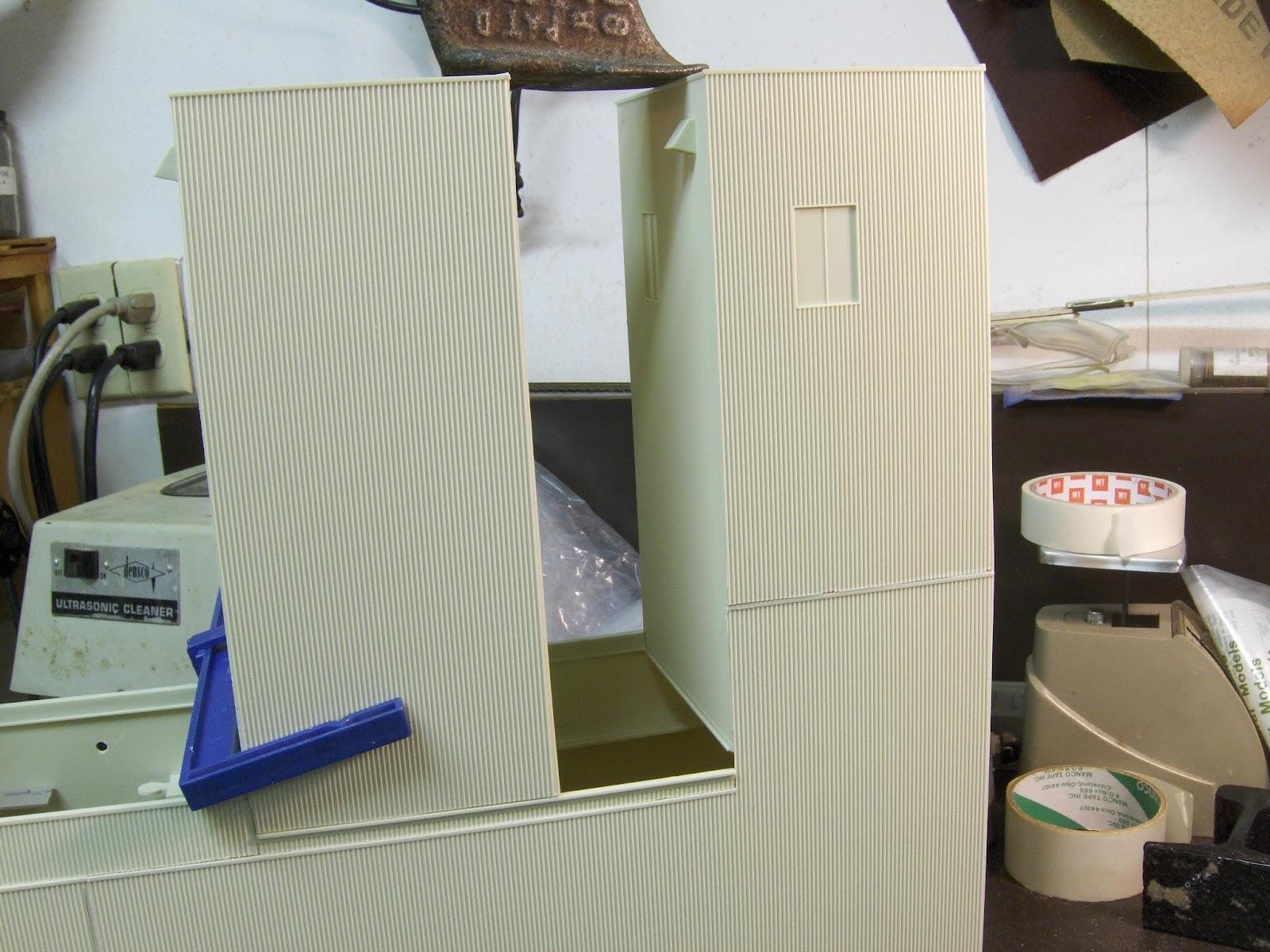 The extra kit gave me another tower to help hide things. Notice how the tower on the right has been somewhat cobbled together. When rearranging parts, it’s always a challenge to make things fit. But what fun is it following the directions, anyway? It’s important to always be open to finding new solutions. By the way, clamps and weights are a big help as the glue dries. 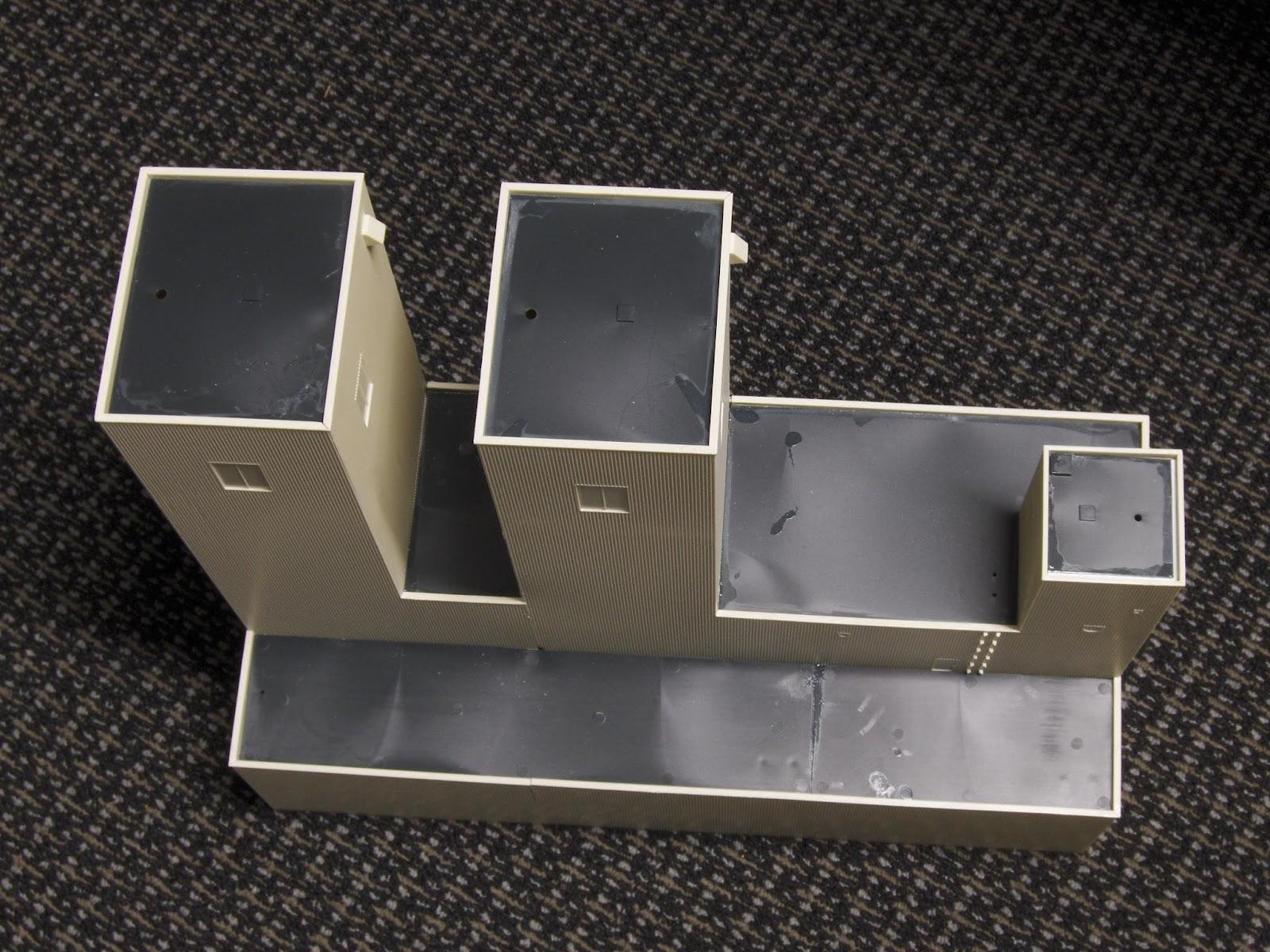 This overhead view shows the two towers as well as a smaller one on the right. The roof pieces were repurposed from the original design to fit the new arrangement. The building is coming together, but there is still a big hole in between. Something had to be done to fix that. 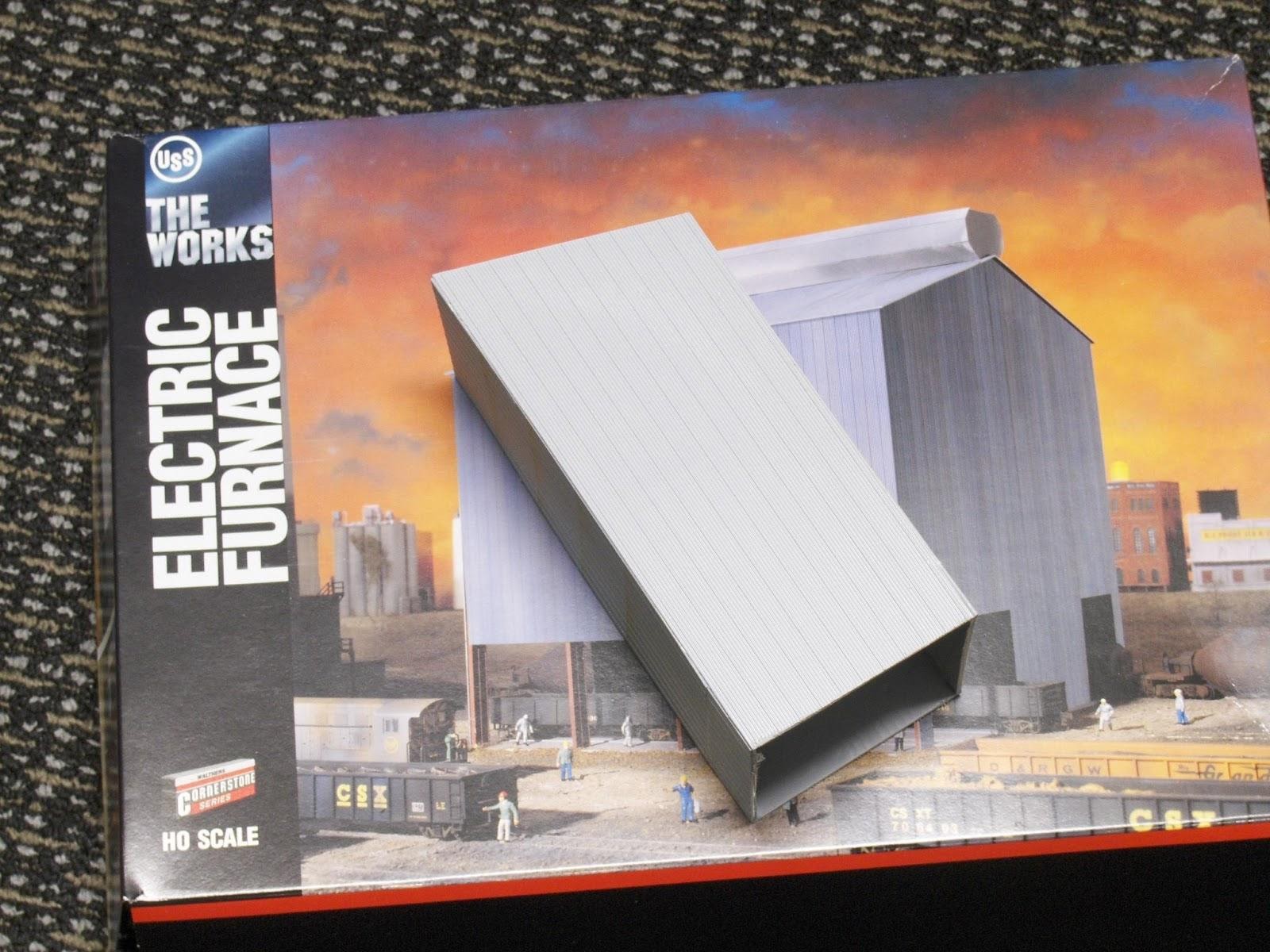 The answer was to use parts from this electric furnace kit to make a new tower from the simulated corrugated material. This required more cutting and fitting to get a reasonable height from the available parts. 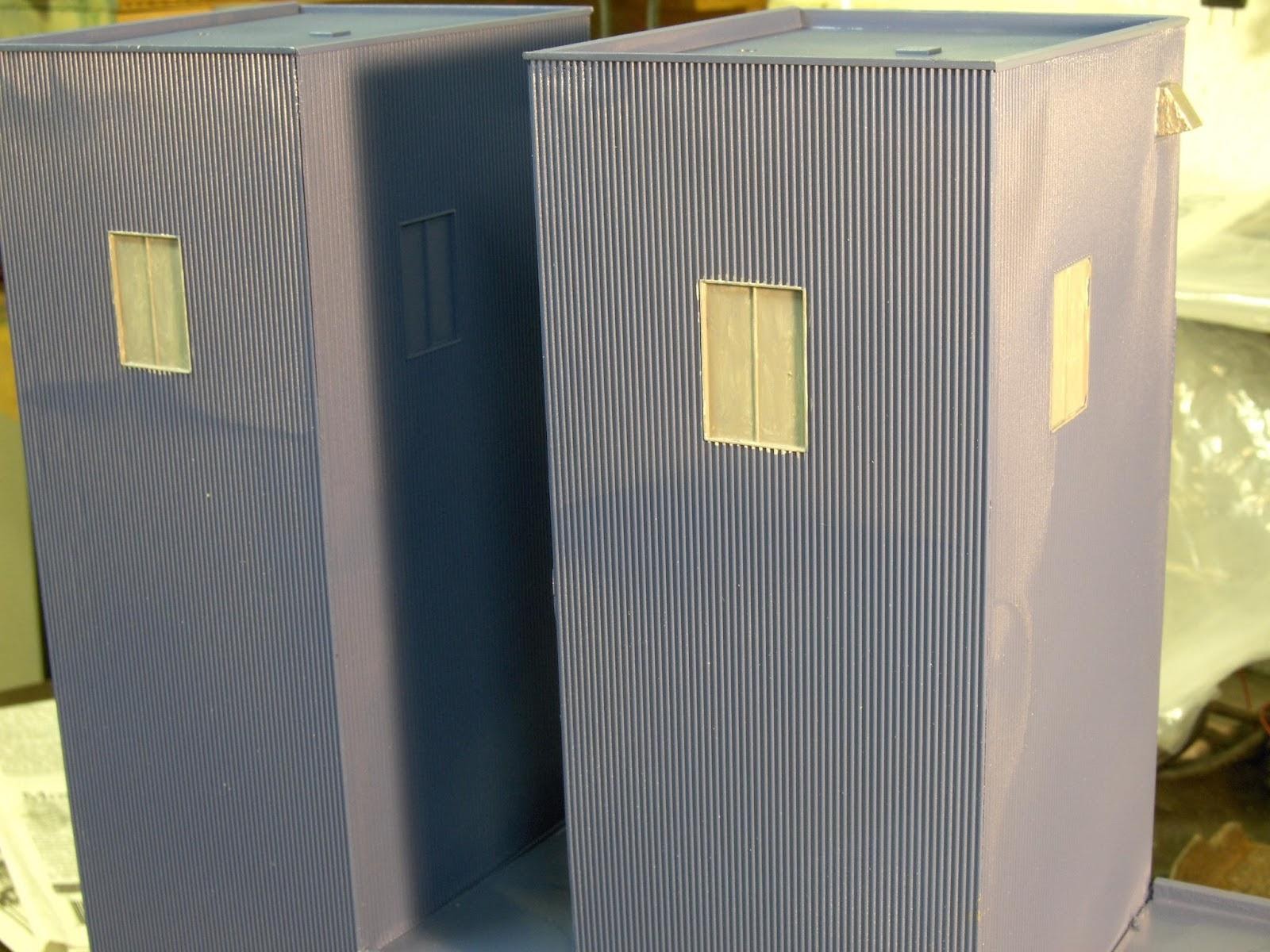 The next step was to coat the building with the same shade of blue spray paint used on the power plant I made earlier. This is the first Walthers kit I’ve built where the doors are part of the wall casting, making it quite a challenge to paint! Normally these buildings have separate door and window castings that can be painted separately and glued in place. 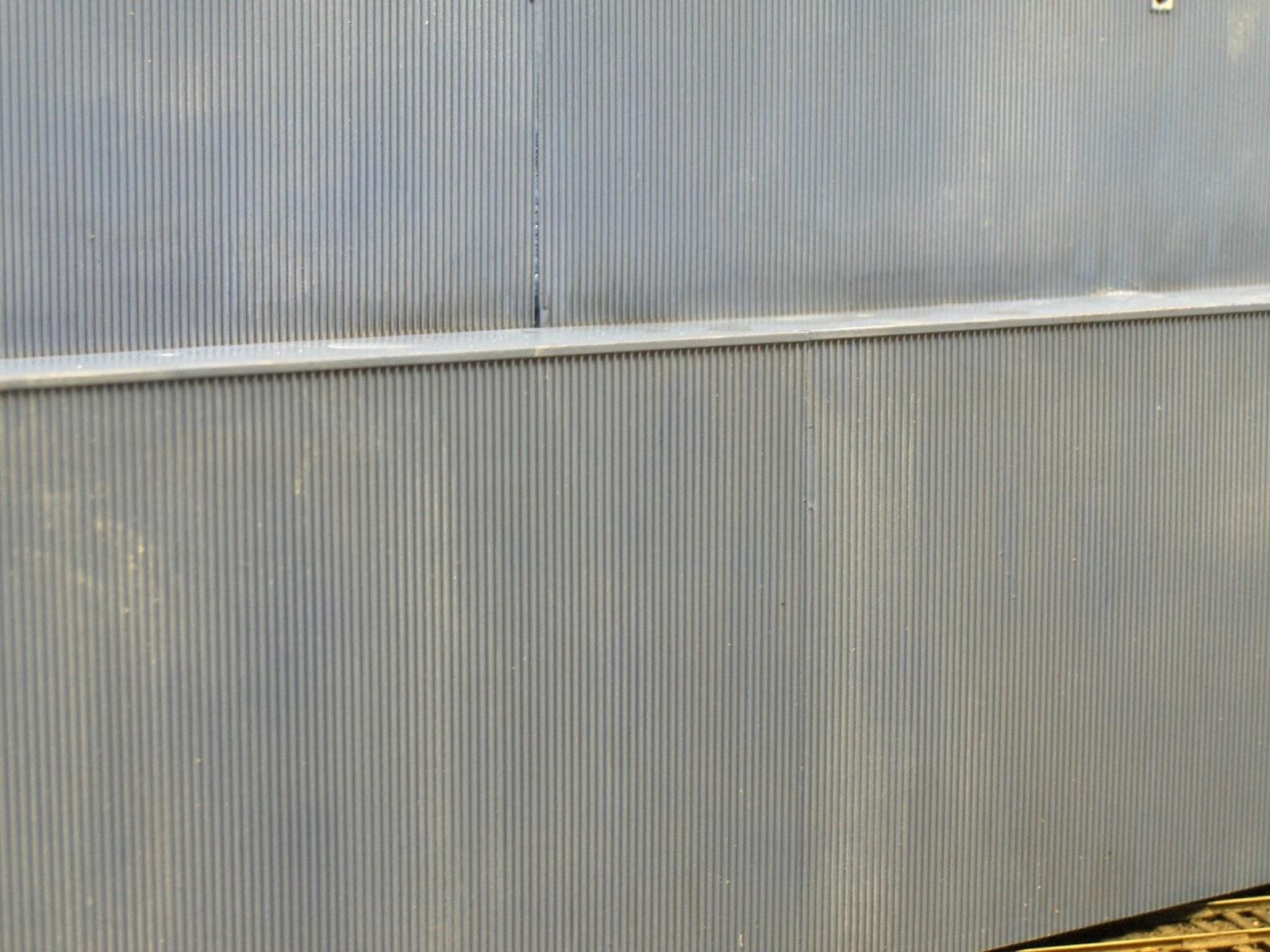 You’ll notice the varied colors on the painted walls. This effect was achieved with blue and gray chalk rubbed into the grooves. This makes the structure more realistic since walls in real life tend to have varying shades and textures on them. Also, if you notice the joints in the middle of the walls, these will be hidden later with ladders and ductwork. 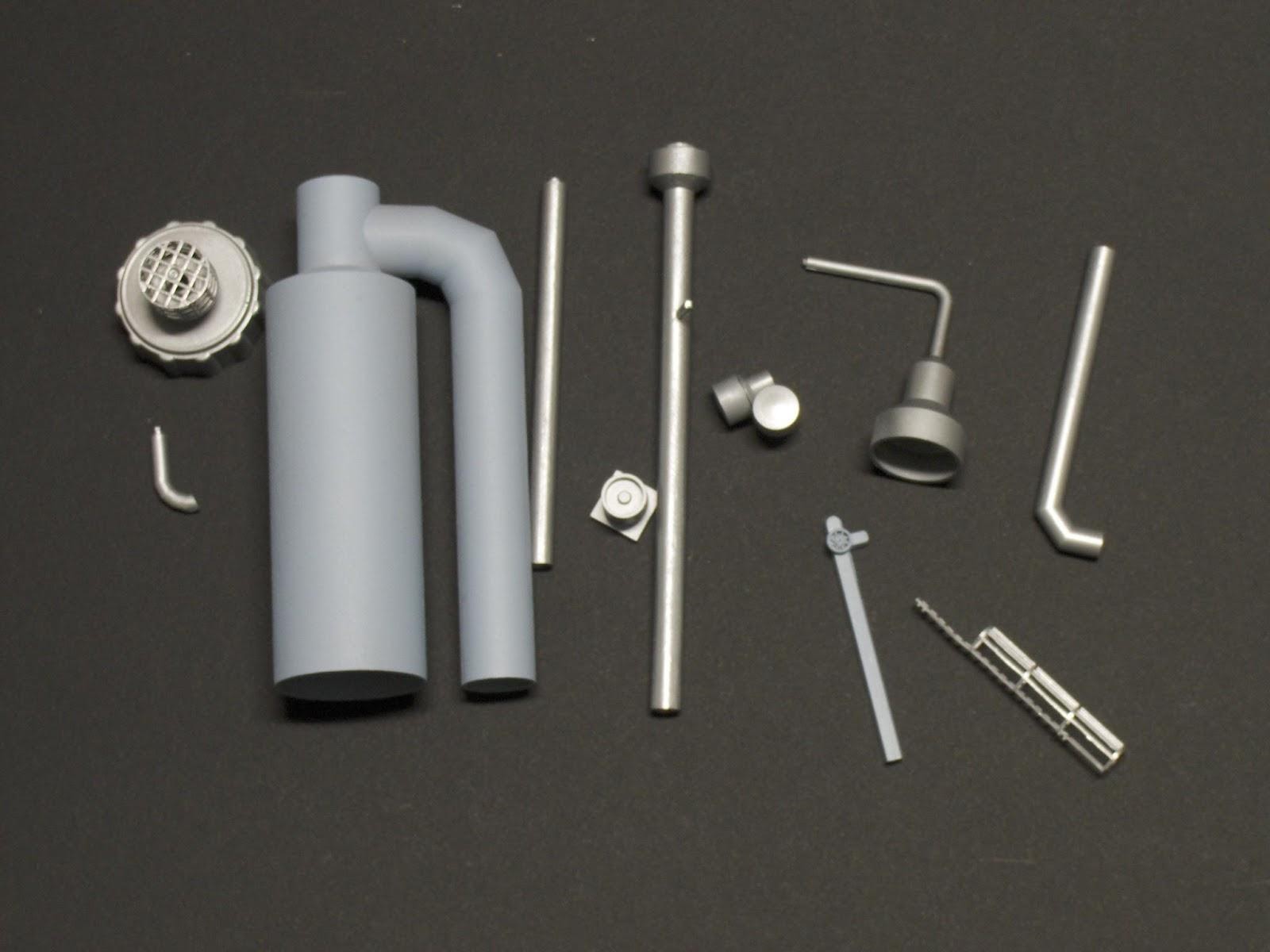 It’s the intricate details on an industrial building that really make it stand out. Many of these pieces came with the kit, while others are actually tops from various jars and sprues that have been painted and detailed. 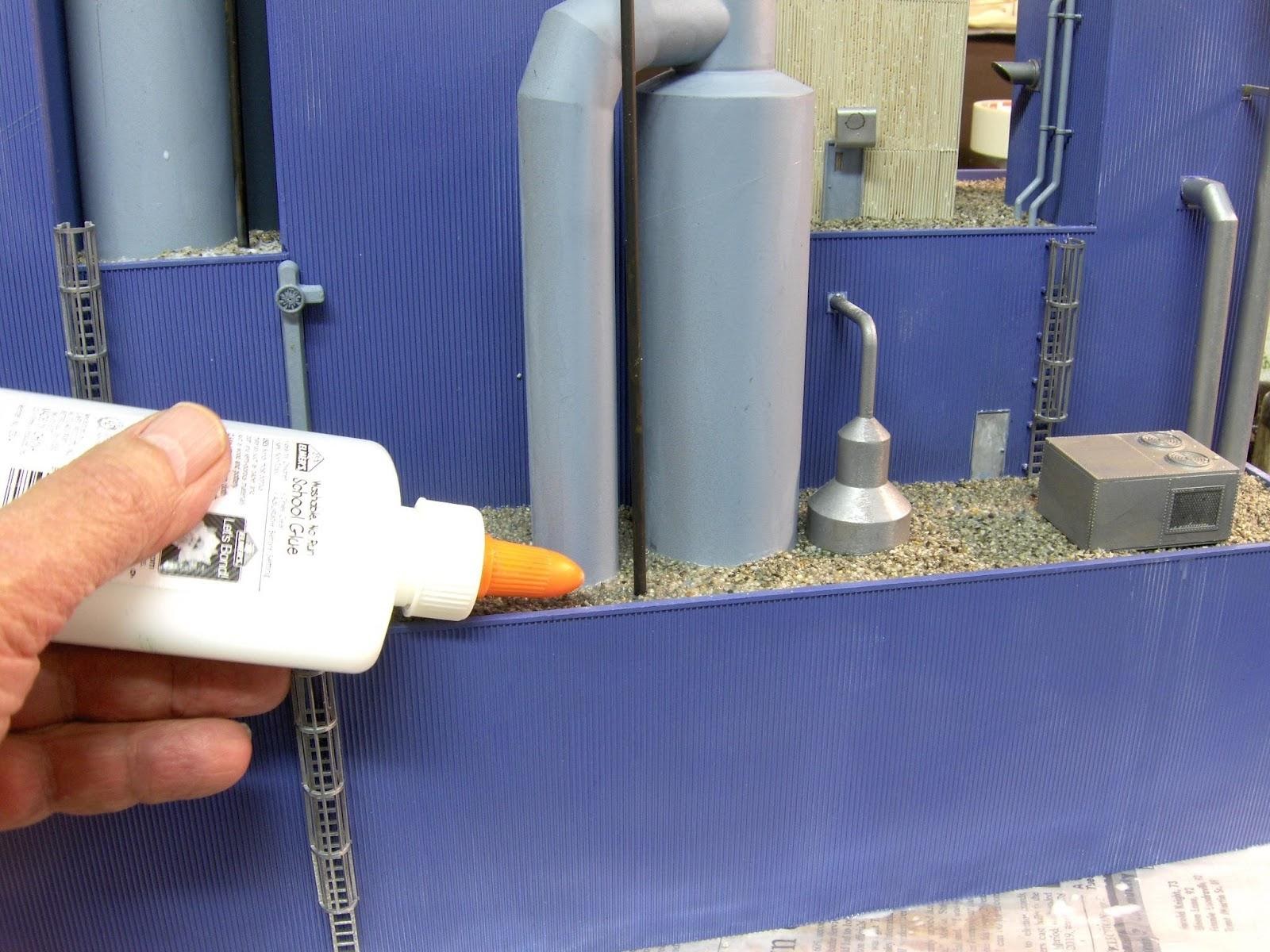 Some of the building’s details are visible in this shot. The gravel roof has been applied, and I dribbled on a bit of diluted white glue to hold everything in place. The new tower from the electric furnace kit can be seen in the upper right. 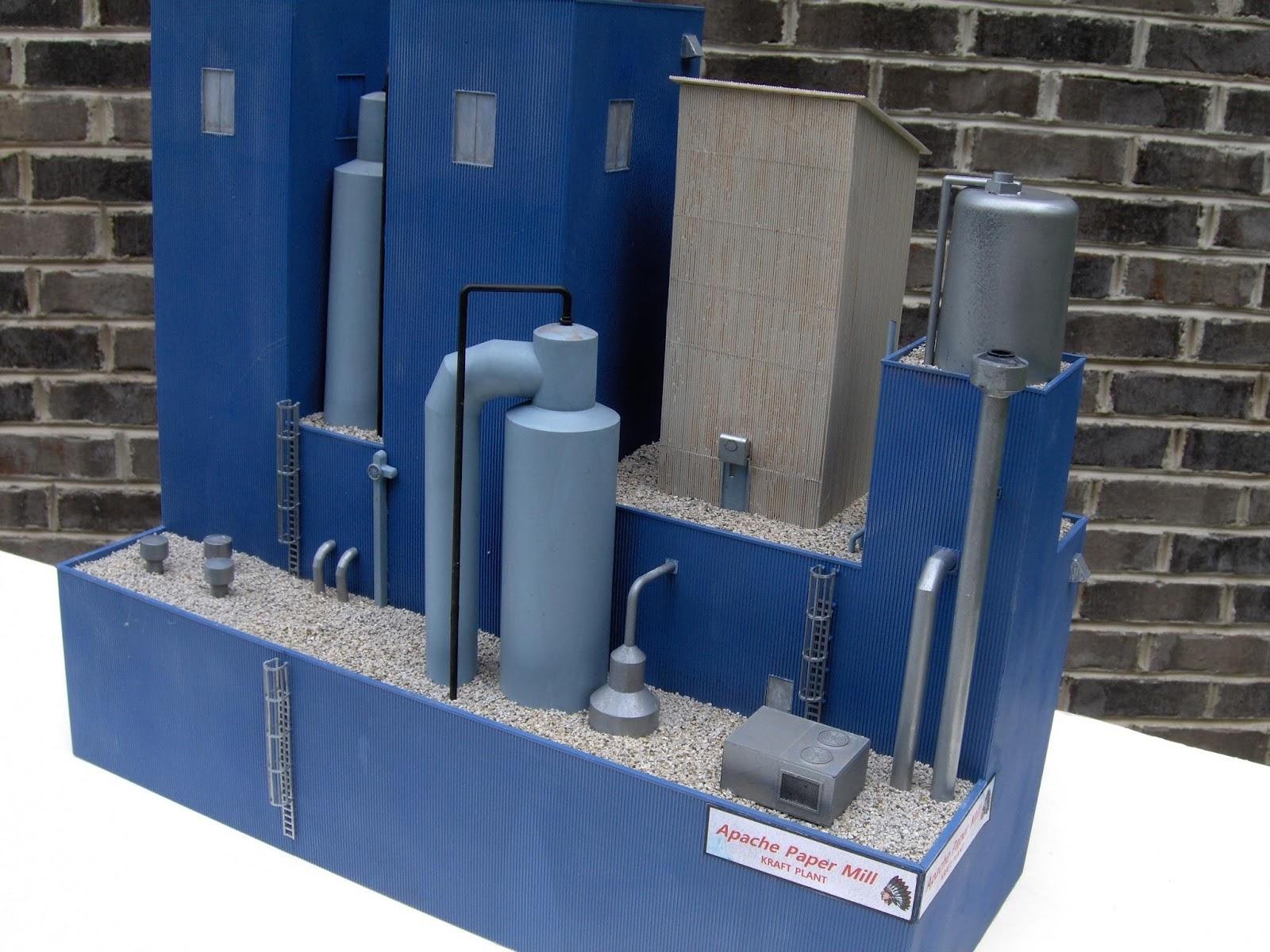 Here’s a good shot of the completed building. The third tower is particularly visible here, and to the right of it is the smaller tower with a homemade tank on top. The building’s signage was made on the computer, glued to cardstock, and attached to the side of the plant. That was the finishing touch on this new building for Dave’s Apache Railway expansion. Now it’s ready to join the others!

One Response to “Finishing the Apache Paper Mill Scene”