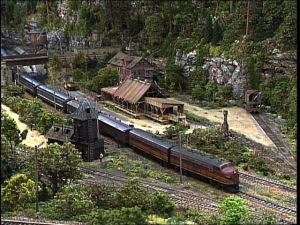 George thinks of the Franklin & South Manchester as a fantasy world of model railroading. He doesn’t try to capture the exact look of equipment or buildings, but goes for the overall effect with an exaggerated emphasis on detailing. Model railroading is George’s main creative outlet for expressing his artistic genius. He has a marvelous eye for color, texture and form. 176 minutes.

Our first two visits (Great Model Railroads, Vol. 2 and 24) concentrated on the original city of Manchester and the newer cities of Dovertown and Bedford Falls. In this installment we devote the majority of the video to the new areas of Franklin, Belverton, Chesterville and Beaver Meadow. You’ll see enough of the earlier towns to give you a feel for them, but the new scenes are so different from the old that they cry out for your attention. George is now doing smaller wood buildings in contrast to the earlier large brick canyons of Manchester and Dovertown. He has even created a logging operation in the wilderness section of the new area, and the whole layout has been greened out with lots of trees!