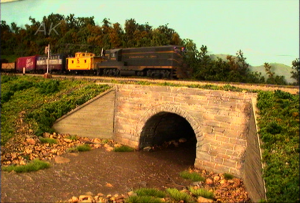 The Midwestern part of the U.S. can be represented by mountains or plains. These series of videos will show you how others have created depth in limited space with hills and even flat terrain. 294 minutes.

Join us as we take a trip through the high mountain rails of West Virginia to explore Tony Koester’s unique model of Allegheny Midland Railroad. Tony’s scale model still stands as one of the most ambitious model railroads the world has ever seen. Follow along and learn about methods of modifying common plastic kits into one-of-a-kind structures and much more!

“Grosser’s Nostalgia Trip” is a 1950’s era re-creation of the Minneapolis, St. Paul and Sault Saint Marie Railroad, otherwise known as the Soo Line. You may have seen this layout at a train show, or at the NMRA National Conventions. Ray and Renee are the husband and wife team who built the Soo Line as a way to remember their childhoods in Minnesota. They both had family members who worked for the railroads. By taking this layout to conventions across the country, the Grosser’s are popular and well-traveled promoters of the model railroading hobby. Renee is one of the finest structure builders in the hobby today, and Ray is responsible for planning and developing a multiple award-winning portable layout. Ray and Renee will show you about designing houses using pictures, applying a stucco-like finish, making stone walls, building foreground quality trees and installing a Digitrax DCC decoder in a steam locomotive.

Gary Hoover’s Missouri, Kansas & Quincy is a modern HO railroad that covers half a continent from Chicago to California. Challenging scenery and photography are two topics that motivate Gary to keep improving. The layout has prairies, deserts, mountains and a seashore. Gary has published many articles and spectacular photos using the layout as a prop. He even likes to backdate the railroad for special photo articles. You’ll see heavy intermodal traffic with modern power from the Burlington Northern Santa Fe, Denver & Rio Grande Western and even the Southern Pacific. This layout was designed to provide operators and viewers with an exciting railroad journey through a variety of scenery. You will learn about making fields and stucco walls from drywall compound, operating slow motion semaphores, moving tunnel curtains, and taking layout photographs. The Missouri, Kansas & Quincy is a great Model Railroad because Gary has created a marvelous railfan experience with his artistic ability to capture the essence of a model scene.