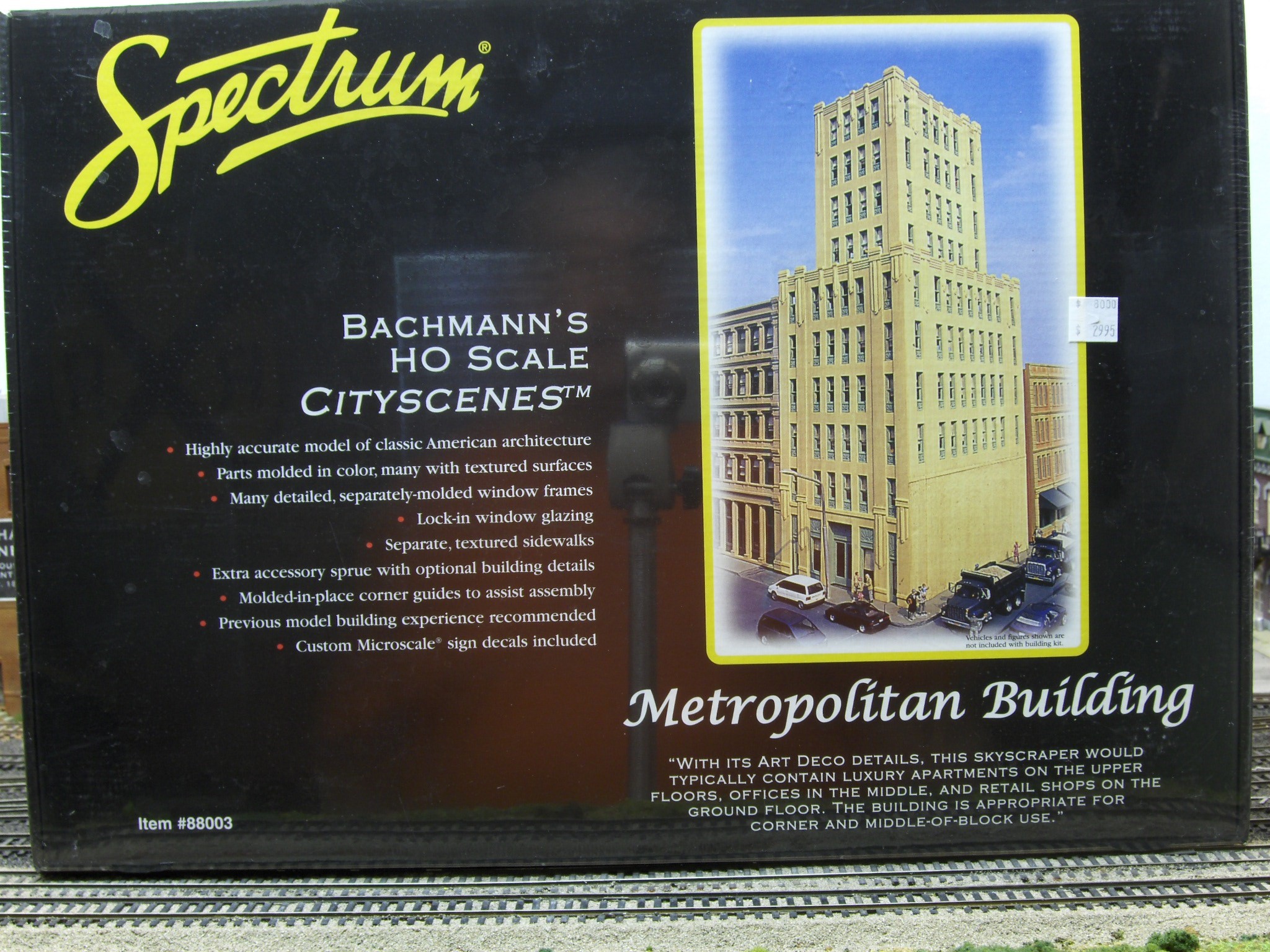 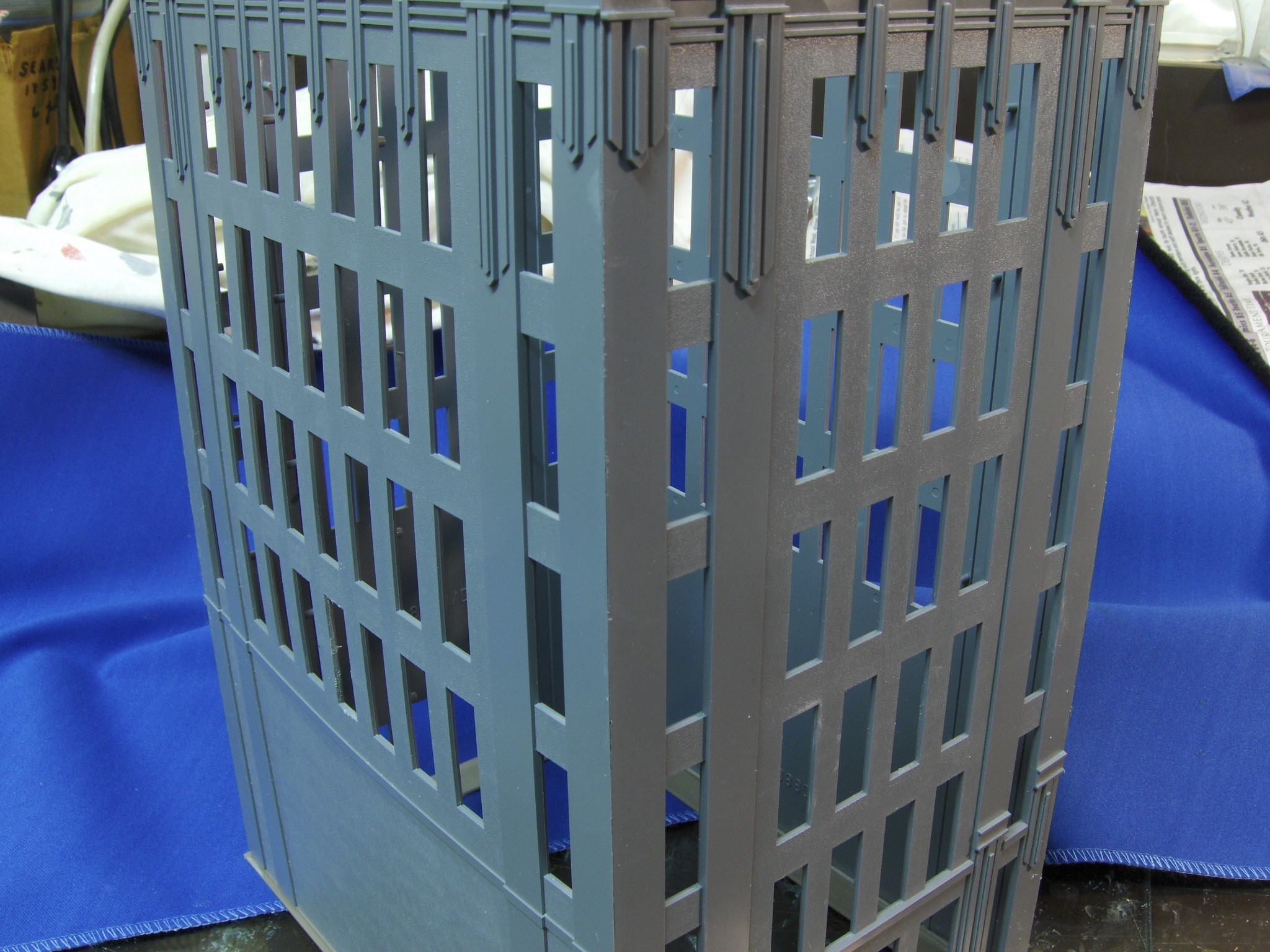 The bulk of the Metro building was built according to the plans, but I did modify the very top structure by making it shorter. 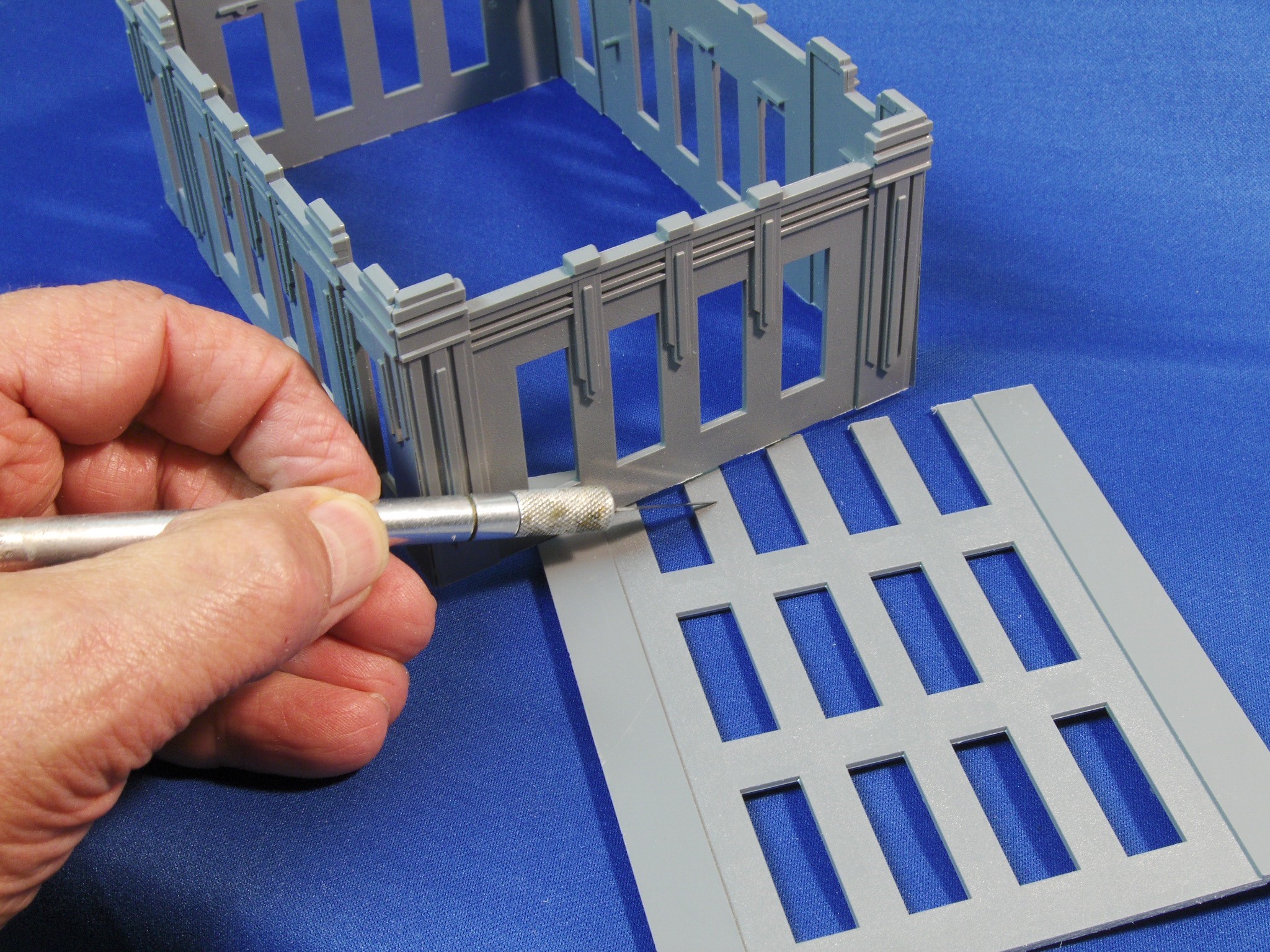 So, I cut off the top of the 2nd section to make this building look different from all the other kits out there. I felt the building would be too tall on Dave’s CD&P because it will be elevated way above the track and surroundings. 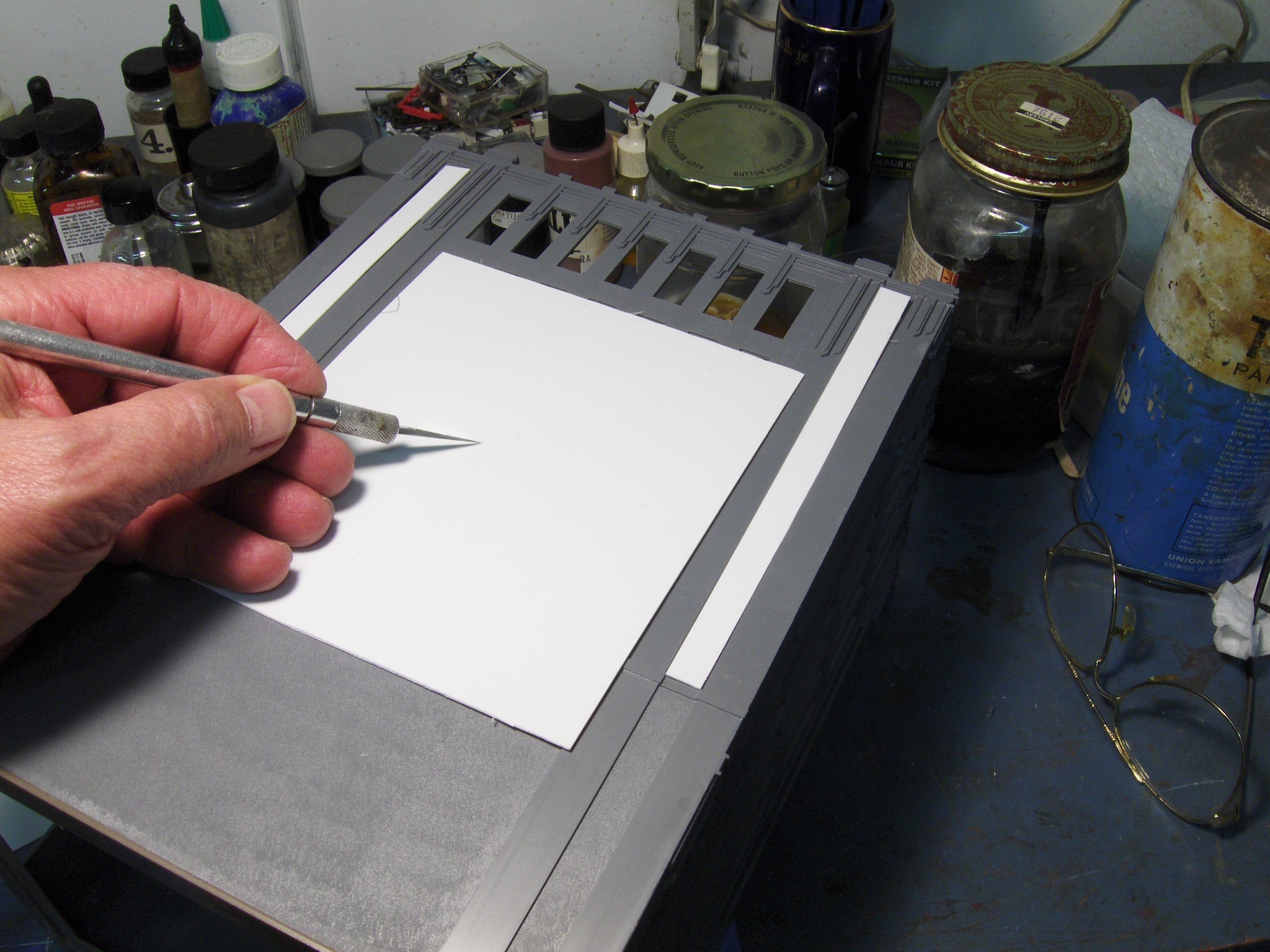 The side that will butt against the third building, the Tower, did not need the windows so I covered the holes with styrene sheet. The windows at the top will be blanked out from the inside. Before painting I always wash the plastic parts in warm soapy water to make the paint adhere better. 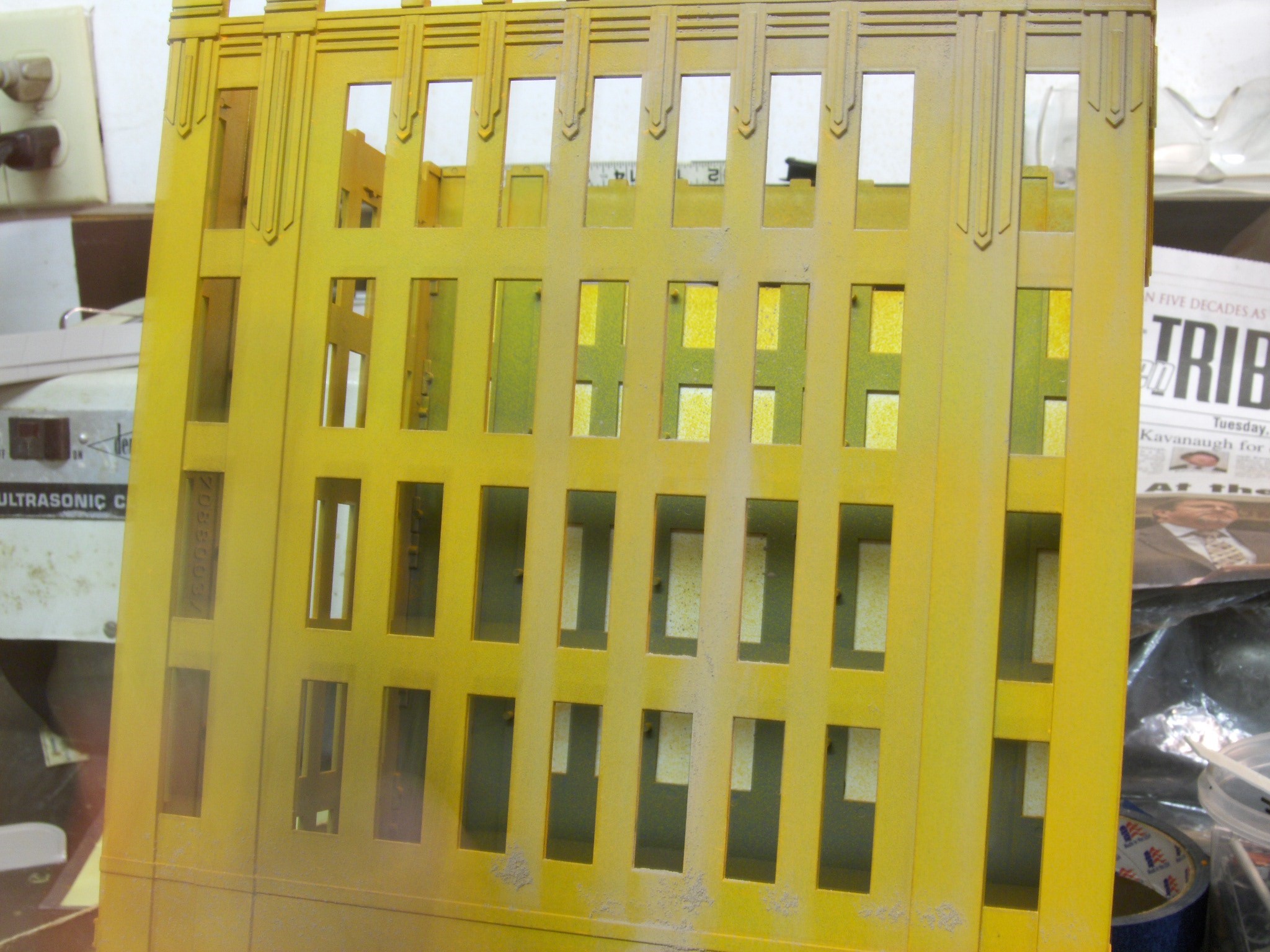 As always, the best way to modify a kit is to paint it another color. Here I’ve sprayed it a yellow orange shade, and then added some powdered orange chalk. 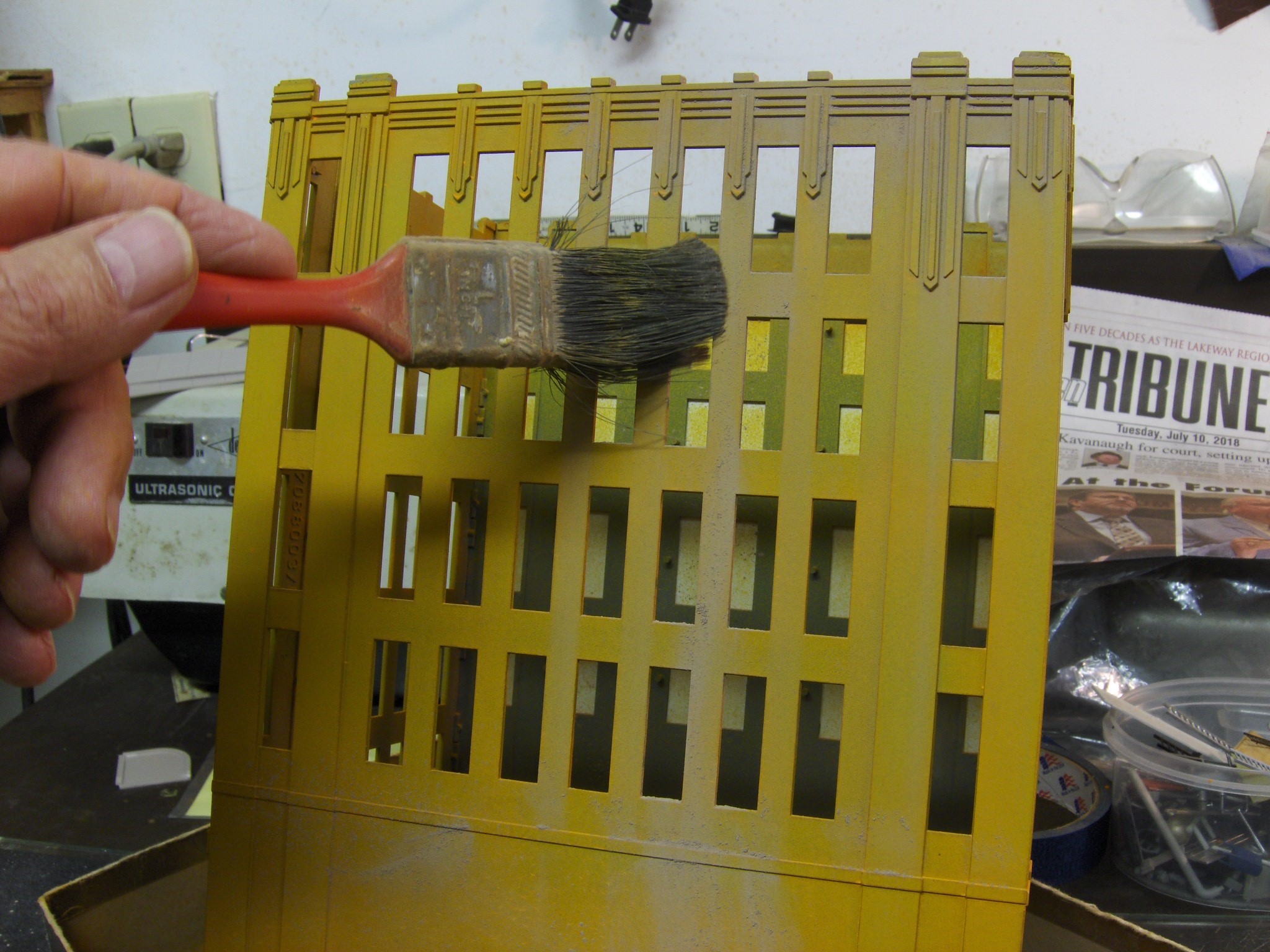 Here I am adding gray chalk and scrubbing it in with a brush followed by a water spray. 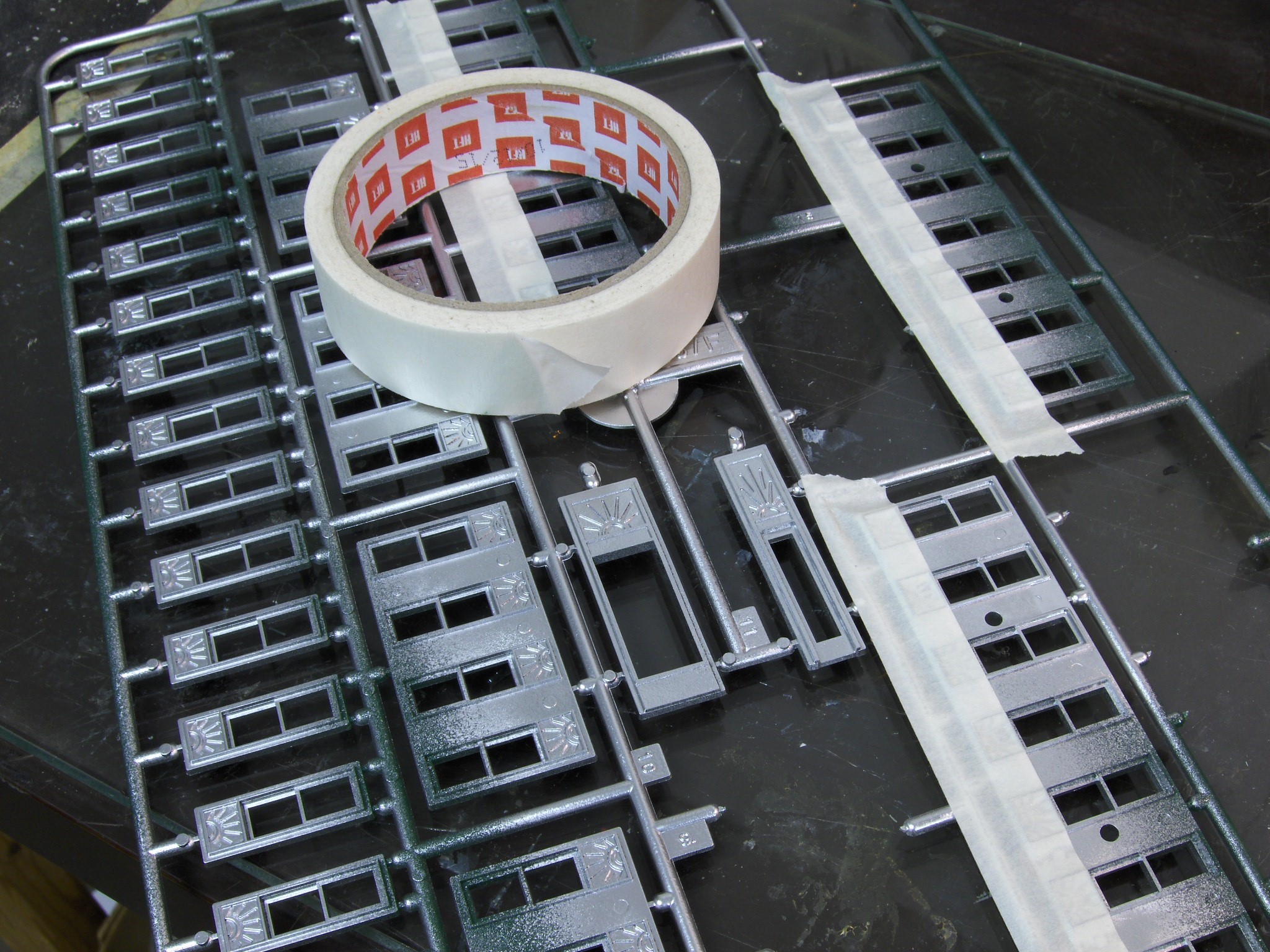 The windows have a nice detail below them that appears to duplicate a tin insert. So, I painted the windows a silver color and masked the “tin” lower section off, so I could later spray the rest of the window a green shade. 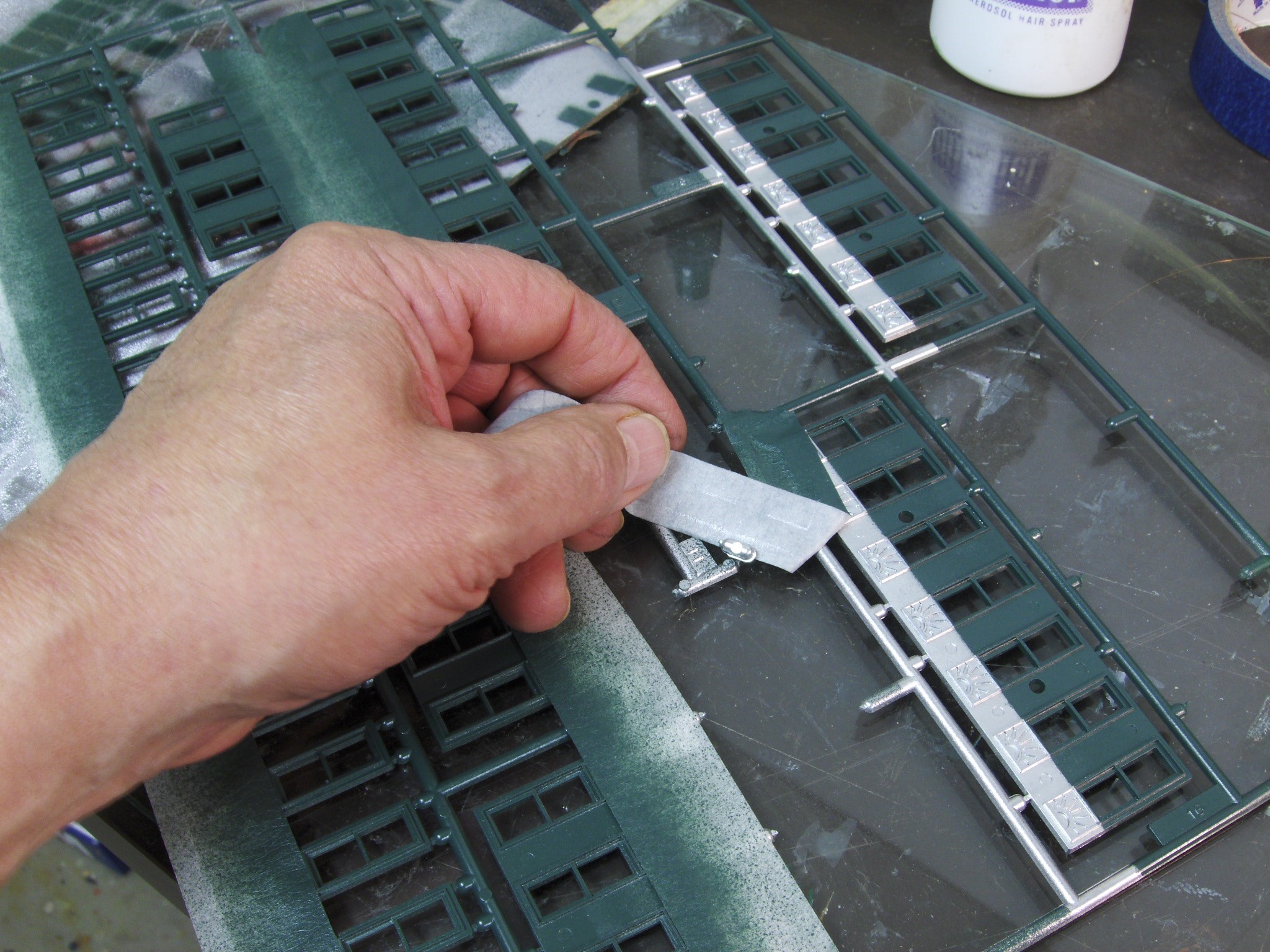 Here I am peeling off the masking tape after spraying everything green. This gives the building a nice touch that will make the windows “pop out”. 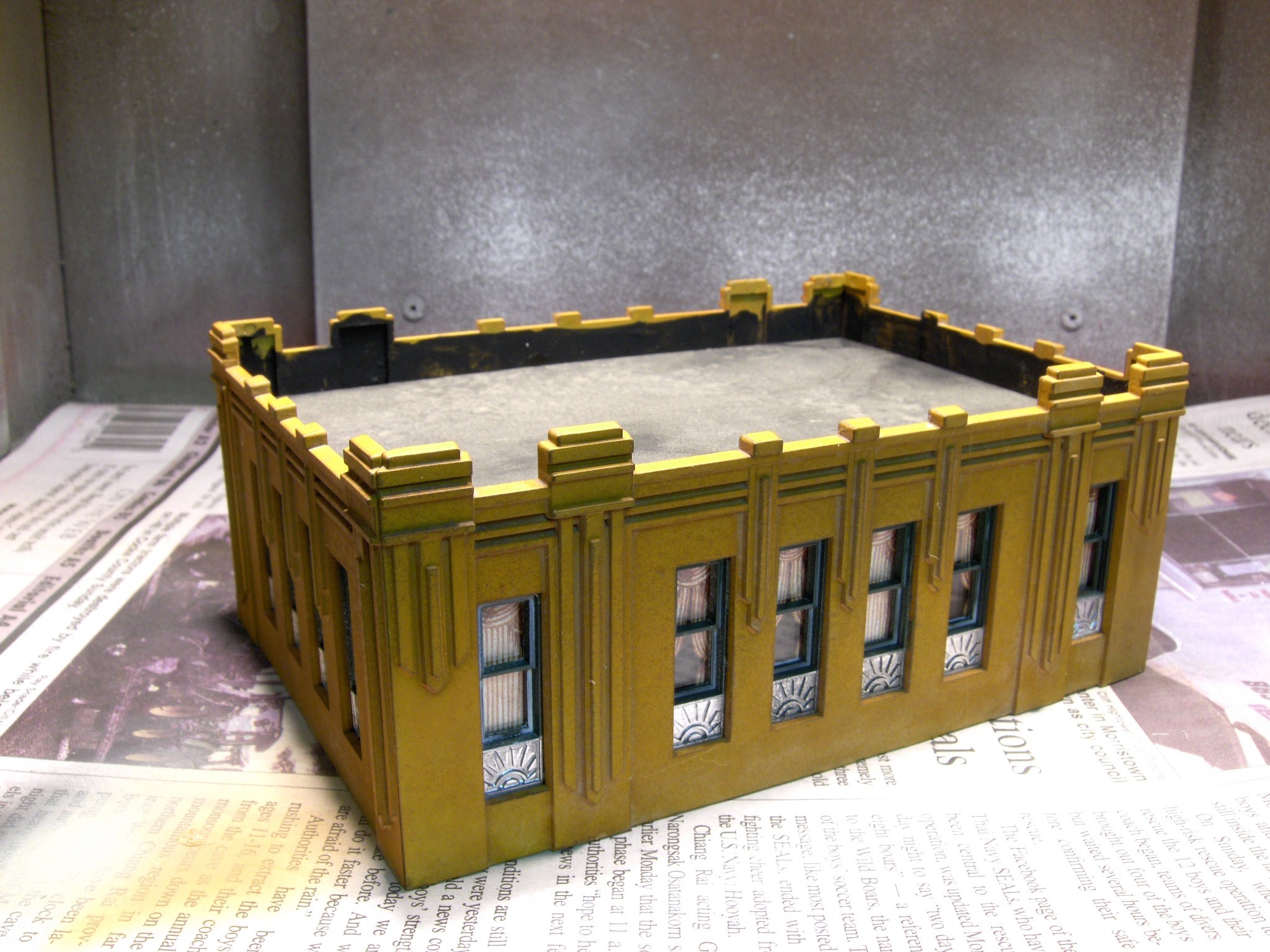 Here is the top section after the windows and window dressings have been added. 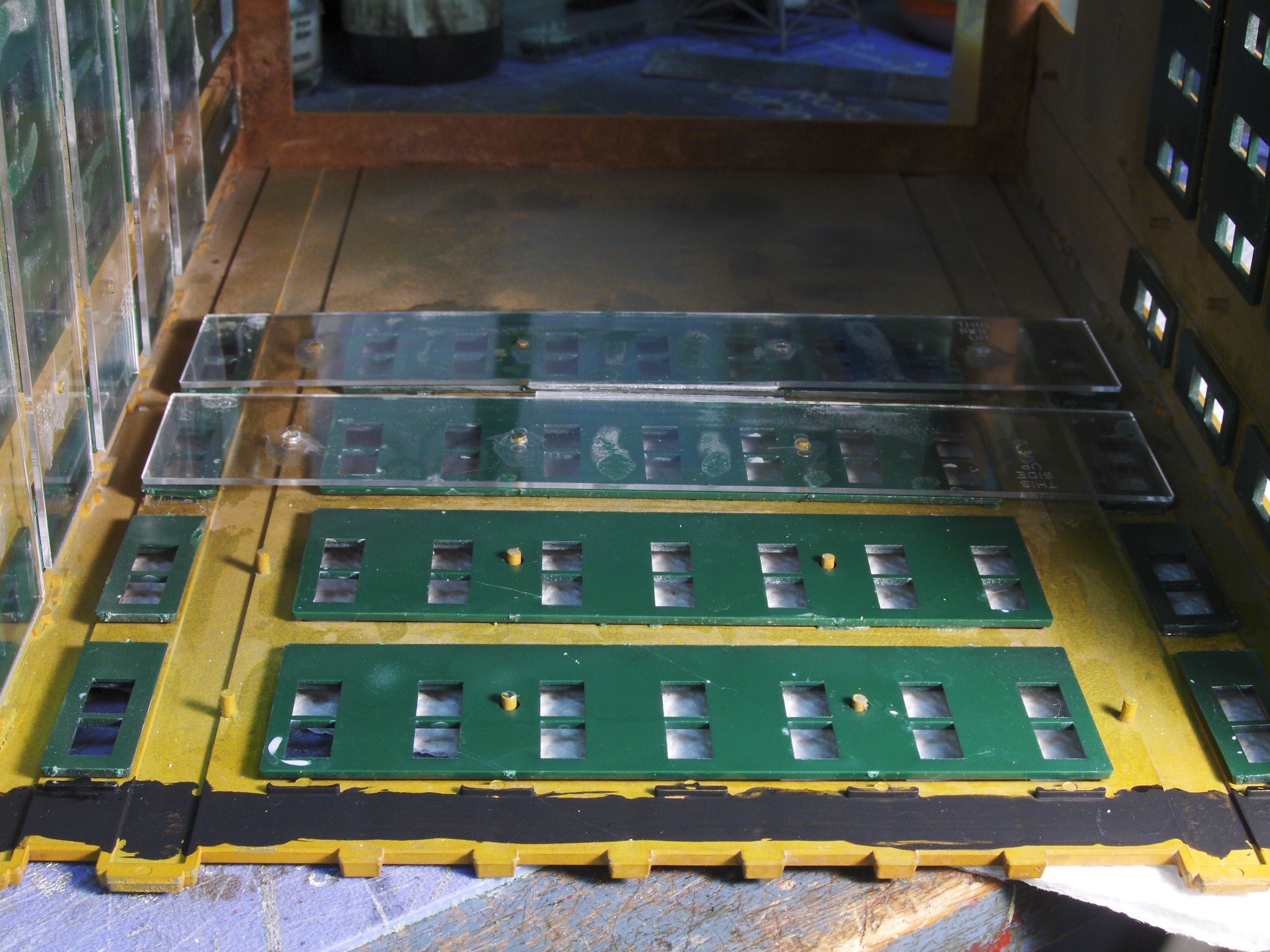 On the main structure I glued the windows and plastic “glass” from the kit in place. At the top I added some acrylic black to help hide the lack of detail near the roof of the building. 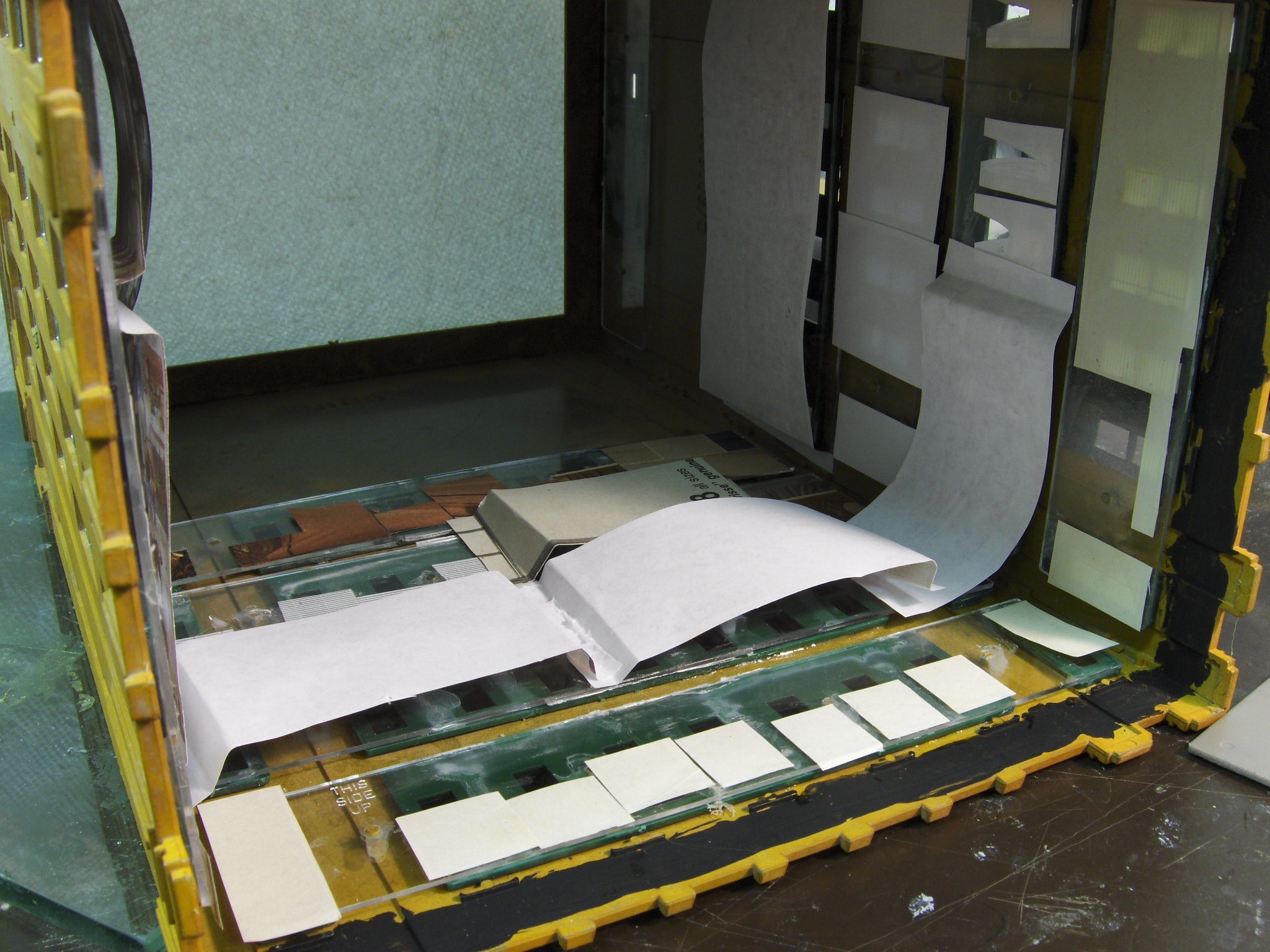 Next it was time to glue in the shades and printed pieces that make the building look occupied. This time I used some full color pictures from supplement ads in the newspaper. It doesn’t matter too much what these pictures are, as long as they look like something when seen from the exterior. 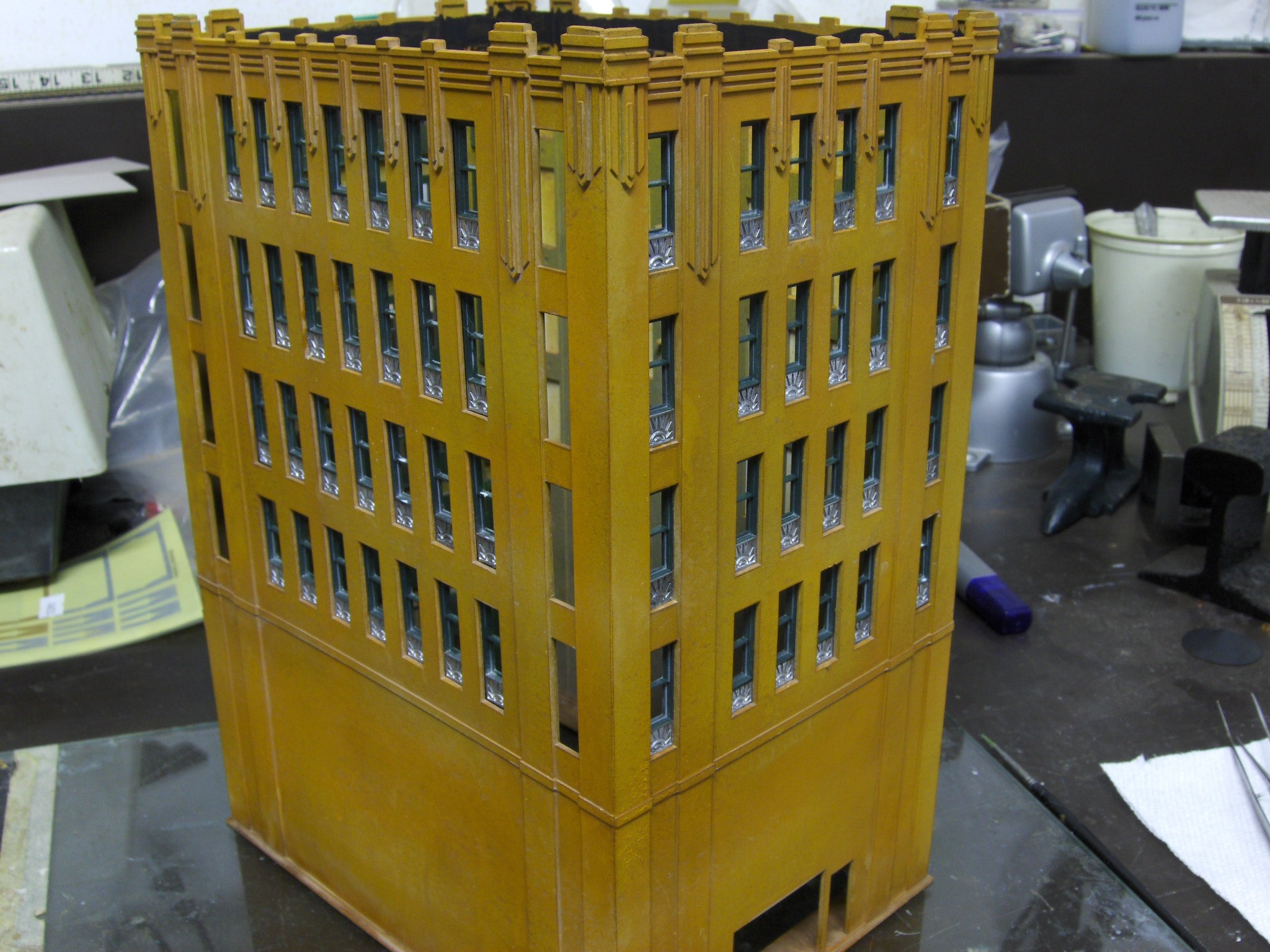 This shot shows you what the various shading does to the finished building. There are dark shadows under the details that make them stand out and the bulk of the walls show a variety of shades just like a real building would have. 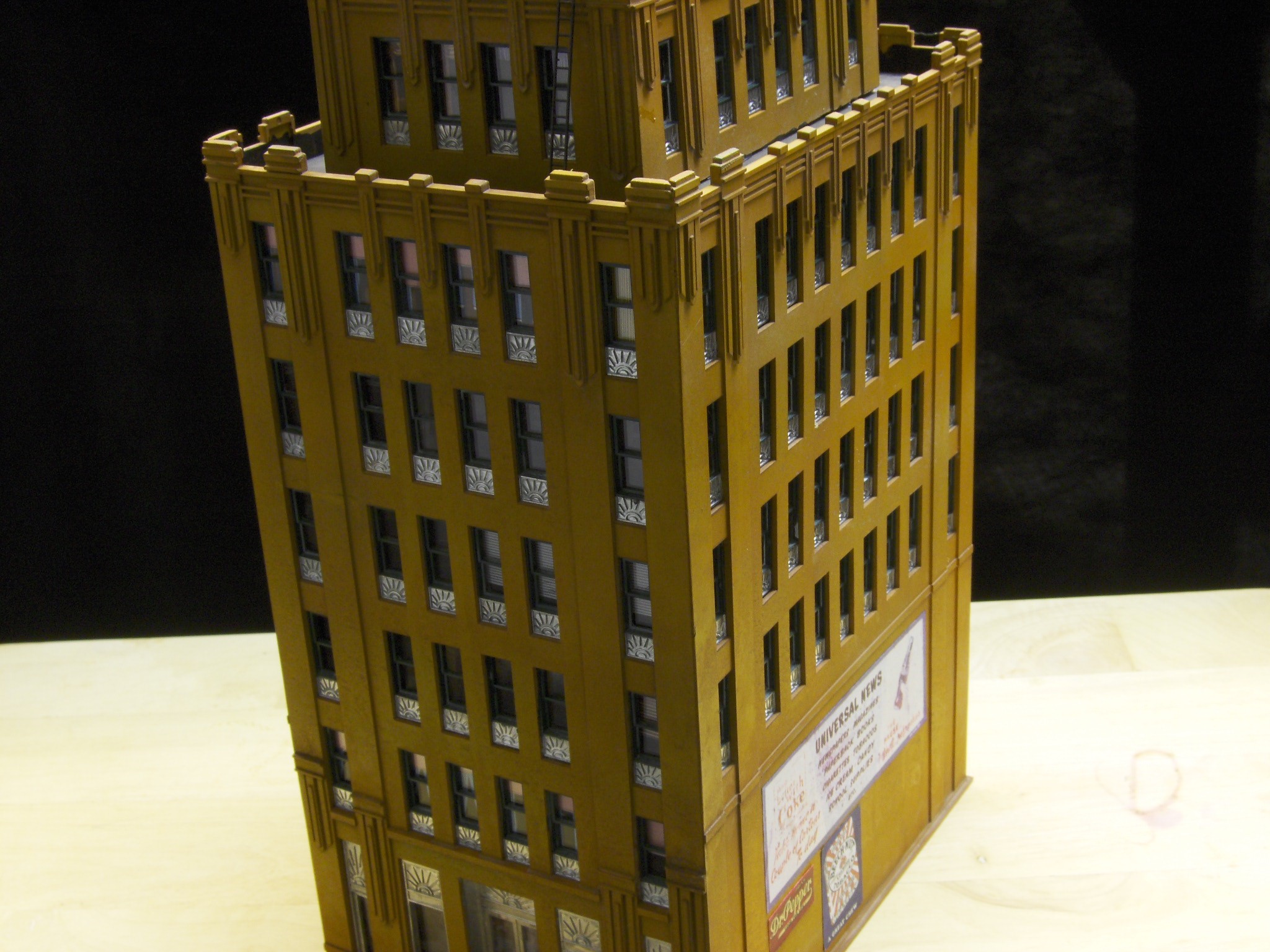 On the right side I added some signs that will grace the planned alley next to the department store that I made in the last part. This also shows the added abbreviated upper section instead of the original 4 story upper section. 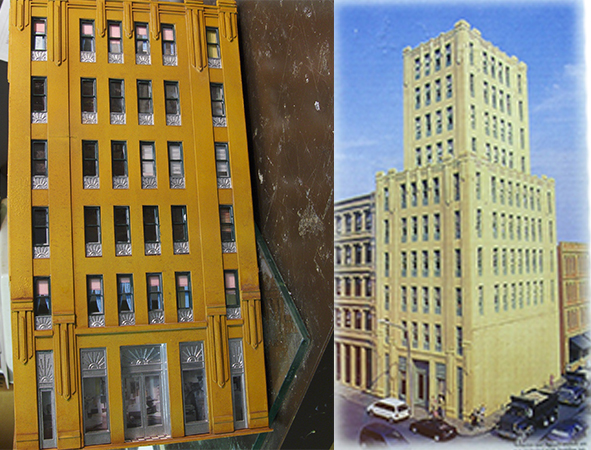 This is the view of the front with all the “apparent” interior detail added. There are window shades, venetian blinds and nondescript details from ads. There are also some pictures of offices that I found on the internet. Now we have another building that doesn’t look like the original kit box art on the right.

Want to read part 1 of this article? Click here!

7 Responses to “Building a Block for Oakland Part 2”