Sign in to view full video or become a member now!
Duration: 4:47

For the next stop on our tour of the Colorado and Southern Railway, we explore the layout and scenery of Baldwin. Baldwin, which is located in Gunnison County, Colorado and serves as midpoint in the Ohio Creek Extension, was once an important hub for the C&S Railway. Toeing the narrow ledges of coal mines buried in the Rocky Mountains, Baldwin can be a very busy place. So join us as we take a look around at some of the station’s most notable features with this behind the scenes model railroad video.

In this sneak peek model railroad video, expert modeler Tony Koester walks you through the beautiful setting of Baldwin, where key locomotives of the C&S Railway make their changeovers and head east or west from the Ohio Creek Extension. While in Baldwin, you’ll get a close-up look at some of our experts’ award-winning details that make this scene come alive. Such details include a depot and coal mine, turntable and engine servicing facility and the unfinished Palisades, which shoot straight up into the sky and lead to Alpine Tunnel.

Also in this model railroad video, you’ll discover features of this small Colorado town that add a touch of realism to the scene, from a weathered water tower complete with moss growth to laser-cut depots and stores. Track diagrams, finished with era-appropriate font, show operators the layout of trackage and the location of each industry that makes its way into the station at Baldwin.

Heading out of town to cap off this model railroad video, we’ll cross over a long trestle that traverses the west branch of Ohio Creek, which was created using EnviroTex Lite. After making their way west from Baldwin, C&S trains will climb to Kebler Pass by way of the Rockies, formed in this scene with linoleum and commercial murals. Watch this model railroad video to see what else went into the making of the town of Baldwin! 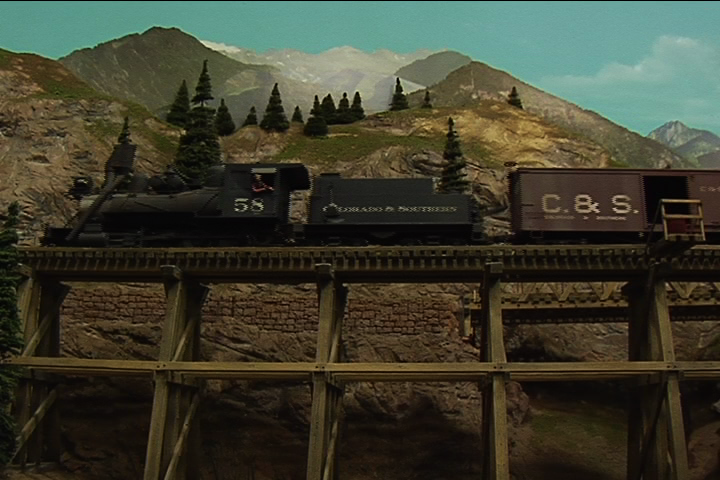 $3.98
Add to Cart
Behind the Scenes Model Railroad Video: Baldwin, COJoin Model Railroad Academy to continue watching for $8.00 per month / $86.00 per year or purchase this video for $3.98.