Sign in to view full video or become a member now!
Duration: 4:32

Some of our favorite model railroad layouts are set in decades past, as far back as the 1940s, when the rail industry was first booming in the west and evidence of World War I still lingered. This era is so fascinating to us that we decided to try our hand at recreating model train scenery from 1942, when the Rocky Mountains and Rio Grande were alive with the sound of engines and grinding metal.

Our goal was to build an expansive HO scale model of the Ohio Creek Expansion of the C&S Railway, which joins at Floresta Junction with the D&RGW Railroad, and we’re pretty proud of the result. In fact, we’d like you to take a look at the model train scenery we constructed, so we begin with one of our favorite sections of the trackage, in Gunnison, CO.

Building out the model train scenery of Gunnison

For the first stop on our overview of the model train scenery on our HO scale C&S Railway, we head to the town of Gunnison at the mouth of the Ohio Creek Expansion. When we arrive downtown, the first thing you’ll notice is the era-appropriate layout of the town’s industries. From Swift Co. meat packers to Notlaw Lumber, all of the same industries that actually existed in Gunnison in 1942 can be found in our model train scenery.

Similar to the industries present, you’ll also notice small details that carry the same atmosphere common of the western states in the 1940s, from wooden sidewalks and gravel roads to retrofitted speed limit and stop signs. Everything in our model train scenery is as it was, including the WWI propaganda found on rooftops around town.

Lastly, in order to fully capture the feel of Gunnison, we utilized commercial mountain murals, reduced-depth buildings and roads that disappear into the backdrop to best depict the scale and grandeur of the Rocky Mountains. Lose yourself in the old west with our model train scenery of Gunnison and the rest of C&S Railway. 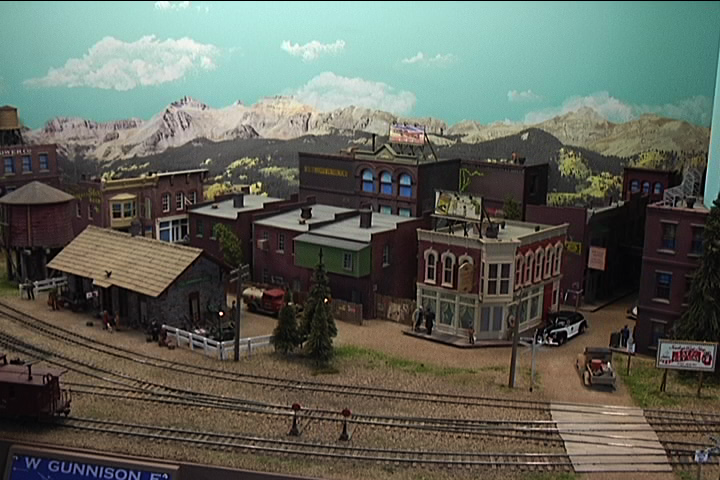