Sign in to view full video or become a member now!
Duration: 7:19

We continue our overview of Doug Tagsold’s O scale model railroad of D&RGW Railroad as we head out of station at Hermosa and into the town of Rockwood. In the 19th century, Rockwood was one of the most vital stopovers on D&RGW Railroad, serving as hub for a number of large lumber mills in the area. In fact, when Extra 464 West pulls into station at Rockwood, you’ll discover a variety of O scale model railroad features that make this small outlet town on the Silverton Branch so essential to industry in the mountains of Colorado. Let’s take a closer look at some of the components Doug included that bring his scene to life.

As you’ll notice when Extra 464 West edges onto the siding at the station in Rockwood, there are plenty of aspects of Doug’s O scale model railroad layout that make it authentic and historically accurate. From tree species that begin to change as elevation increases to scratch-built lumber mills and maintenance stations complete with weathering aluminum roofing, Doug spared no detail in his recreation.

As another example, one of the major standouts for Doug’s O scale model railroad station at Rockwood is its working order board, which can be operated via switch and signifies whether a train can move on through or it should pull into the siding to pick up new shipment orders. In this scenario, Extra 464 West has been notified that it needs to make a pitstop, and while 464’s conductor awaits new orders, Extra 363 East rolls through town on its way to Hermosa. Smooth sliding only in this O scale model railroad scene.

Once orders have been given and 464 is back on the main track, she heads out of Rockwood en route to Tacoma by way of the High Line. Standing 400 ft. above Animas River, the path of the High Line was blasted by a crew in the late 1800s to allow traffic into and out of the Silverton. Doug’s O scale model railroad recreation of the High Line took him and his son 6 months to complete, and we think you’ll understand why when you catch a glimpse of the remarkably carved and painted rock face and river components. 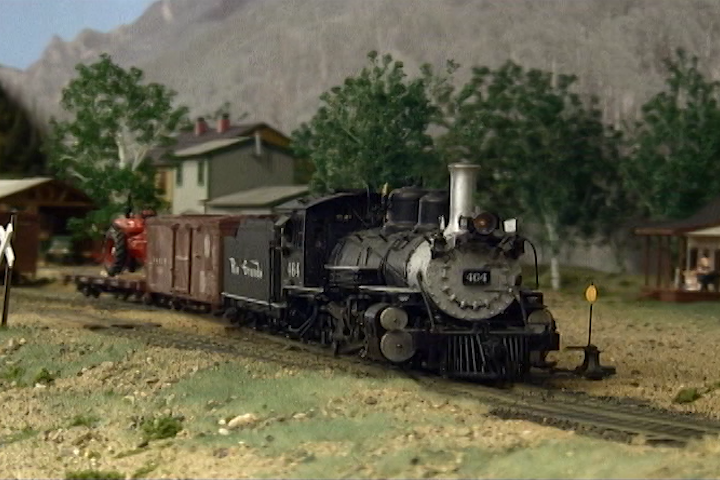 $6.98
Add to Cart
Learning O-Scale Model Railroad in Rockwood, COJoin Model Railroad Academy to continue watching for $8.00 per month / $86.00 per year or purchase this video for $6.98.